Getting up close and digital with nature’s miniature life

Michael Viney: Smartphone cameras allow us to get in close, often to a hand’s breadth of the subject 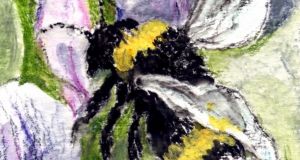 With a teenager’s devotion to a wild idea, I once turned the family greenhouse into a photographic darkroom. It was the only uncontested space, and its cardboard blackout was proof against all but the brightest chinks of starlight.

My first enlarger, conjured from a mysterious, fatherly deal in the pub, was an Edwardian antique of mahogany and brass. It stretched horizontally along the potting bench, the bellows extending on tracks. Its fist-size lens threw a diamond-sharp image, once I had managed to sandwich my modest square of film where the big glass plate of a negative used to go.

Making a print was slow, messy and laborious, involving smelly chemicals. As I became more ambitious, the cost of a perfect 10 x 8 print, its darks rich and velvety, could be quite high. But the feeling of accomplishment, of solitary, magical creativity, was incomparable. Moving a digital image from camera to computer screen, all with a click or two, misses out on a whole slice of youthful fulfilment.

My first camera, an aged twin-lens Voigtlander, could not focus nearer than a metre. With wooden tripod tied to my crossbar, I cycled off into the countryside for landscapes and quaint corners of stockbroker villages while haunted by Ansel Adams’s wild and wonderful boulders and peaks of Yosemite, borrowed from the town library.

Half a century on, in the digital age, I also delight in a different scale of nature – its miniatures – as the rich flow of images from readers arrives at “Eye on Nature”.

The capacity of smartphone cameras to get in close, often to a hand’s breadth of the subject, has embraced the beauty and interest of the single flower or woodland mushroom, the single beetle or bumblebee, the individual butterfly or moth, and (I sometimes shrink to see) the poised and solitary spider. Along with the images comes the quest to know more, which Ethna tries to satisfy.

Among Europe’s finest close-up photographers is Dr Robert Thompson, who is based in Banbridge, Co Down. An entomologist, he knows what everything is and where it’s likely to be. I met up with him once in the dunes along the shore and marvelled at the range of Nikon hardware clustered weightily across his chest: if not this camera, then that one, and whichever lens, tripod, knee pads or ancillary gadget needed for the shot.

Thompson’s classic work has already been seen in weighty volumes of dragonflies, butterflies and moths published by the Ulster Museum. He has now produced a masterly guide, Close-up and Macro Photography: Its Art and Fieldcraft Techniques. It’s not cheap – €41 even in the hefty, large-format paperback – but it is visually thrilling and technically exhaustive.

Thompson’s life as a professional natural history photographer means marketing flawless photos with impact and a personal style: “branding”, as he puts it. Along with the right exposure, white balance, colour temperature and expertise with clinical software comes an artistic gift for an image that draws a gasp.

The fieldcraft offered by Thompson, moving from one habitat to another, can be beguilingly practical, as in keeping one’s head off the skyline while stalking dragonflies perched at a pond, or searching for the one mushroom the slugs haven’t got to.

Wind and weather count as much as knowing where and when to look, and blue-sky, breezy days are definitely not the best. There are flexible yokes to hold a flower still (among them the wonderful “Wimberley Plamp”), tripods that sprawl obligingly flat on the ground, and screens that diffuse the overly harsh light of bright sun.

Early morning finds the light kindest and insects still torpidly waiting to be warmed into life. When they’re flying, a light shower of rain can bring them down to the leaves and add sparkling drops to a flower or a dragonfly’s wing. In winter, soft mist can bejewel a spider’s web or frost coat a seed head or berry in diamonds.

Close-up and “macro” photography are not the same: the latter means images often greatly enlarged from life. Not everyone enjoys inspecting the glaze on a wasp’s eyeball. Thompson usually settles for doubling the size, perhaps with telephoto lens and extension tube. If there is a special style to his work, it shows up well in his exquisite studies of day-flying moths pretending to be tree bark and of ineffably elegant caterpillars and dragonflies, or flowers showing off their stamens.

His scope widens to lichens, fungi, rock pools and streams (bring your own aquarium and put everything back where you found it). And given his ruthless perfectionism – every hair glistening, every petal immaculate – it is reassuring to be told that smartphone and mobile phone cameras can often yield “acceptable” images.

Routledge is offering – for a “short time” – Another Life readers a 30 per cent discount on Close-up and Macro Photography. Go to https://iti.ms/2IPW27U and quote the discount code MACRO230 at checkout.