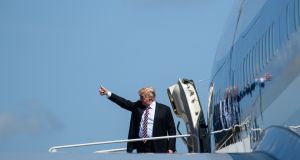 The US president Donald Trump is proving to be a valuable – if unlikely – asset in the fight against climate change, the head of Europe’s main climate innovation body has claimed.

Kirsten Dunlop, the chief executive of Climate-KIC, said Mr Trump’s controversial stance on the issue – he once dismissed it as a hoax created by the Chinese to destroy US jobs – has galvanised action, particularly in the US.

She said her organisation had seen a big increase in activity and investment from businesses and non-governmental organisations since Mr Trump became president.

“Trump is a huge positive in a horribly perverted way. He has catalysed a seriousness that wasn’t there before,” she told The Irish Times.

“US organisations are desperate to do something to prove that they care; that they are willing to take action; and that they have resolve,” she said.

Several US states are fighting a rearguard action in defiance of the US government’s stance, pledging to cut emissions and meet their share of the targets agreed under the Paris climate accord.

Ms Dunlop was in Dublin to meet various political and business figures ahead of the group’s annual climate innovation summit, which takes place in the city later this year.

Despite the unified action promised under the Paris agreement, she believes collective action on a state-by-state level has largely failed to address the issue, evidenced by the fact that emissions are rising again in Europe.

She said nation states are too disjointed and fragmented to undertake the level of change required, and that cities and local authorities – where citizens had a more direct buy-in to policies around air quality, waste and energy – was where the battle will be won.

This year’s Dublin summit will focus on the finance needed to accelerate climate action.

“Transforming the financial sector so that it can kickstart a zero-carbon economy necessitates not just new relationships with the finance sector, but new business models, new ways of accounting, reporting and understanding social and environmental value,” Ms Dunlop said.

The European Commission recently unveiled an action plan to channel more than €180 billion of investment into climate initiatives by 2030 in order to cut the bloc’s emissions by 40 per cent.

Climate-KIC has so far invested €1.6 million in climate start-ups in Ireland via Sustainable Nation Ireland. Hexafly, the Co Meath-based firm that manufactures protein-rich fish food for the aquaculture sector, and Longford’s Mimergy, which is developing a sustainable way to recycle waste tyres, were both recipients of funding from the group.

Minister for Finance Paschal Donohoe, who will open Climate KIC’s Dublin summit in November, said the State’s recently launched 10-year National Development Plan and the €22 billion allocated to climate change measures, along with the leadership and innovation shown in this area by Irish businesses, highlights that commitment and charts a path to dealing with the issue.

“The 2018 Climate Innovation Summit is an important step on that journey,” he said.