Nolan’s in Clontarf commits to eliminating unnecessary wrapping and packaging 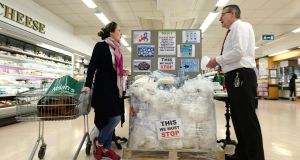 It may look like a modern art installation, but the large bale of waste plastic, including film, drinks containers and cartons, placed on the floor in Nolan’s supermarket in Clontarf, Dublin, is designed to send a stark environmental message.

That is made clear from a poster displayed nearby: “This we must stop.” Beside that is another “Please help” notice with a commitment that, during 2018, the family-owned, independent outlet “will try to reduce and eliminate all unnecessary plastic wrapping and packaging”.

Unlike major supermarkets which are committing to deliver on a new approach to packaging (plastic in particular) in the coming years, Nolan’s has set itself a more demanding timeline, according to one of its store managers, Aidan Whelan.

Already, it has introduced “bio-bags” for all its fruit and vegetables, and removed excessive bulk wrapping where possible, while at its salad bar there has been a 50 per cent reduction in plastic by switching to compostable cardboard punnets, he explains.

The reaction of shoppers has been remarkable, he says. “We have been inundated with compliments. They think it’s a great initiative. Of course, they want it done yesterday. They are congratulating us but also asking, ‘when are you going to do this and that?’”

The transition won’t happen overnight, Mr Whelan points out. Convincing suppliers is “very difficult” for starters, though there are indications of change on this front. The supermarket stocks 20,000 products at its premises on Vernon Avenue and is currently scanning its complete range to see what items contain plastic and who supplies them.

Once that database is complete, Nolan’s will be contacting suppliers to ask what they propose to do in light of plastic’s impact on the planet. Apart from completing a multi-million development and refurbishment on the site, its plastic initiative is the supermarket’s number one priority this year.

In a recent letter to its customers, managing director Richard Nolan points out Ireland is the top producer of plastic waste in Europe, and quotes a World Economic Forum warning that in 2050 there will be more plastic in the ocean than fish.

He outlines the company’s strategy to actively source replacements to change to paper packaging and biodegradable, compostable packaging. The letter concludes: “Please help and support this environmental challenge by buying with your conscience.”

A regular customer, Dr Irene Lavin, who lives in Clontarf, says she approves and endorses what Nolan’s is doing. The picture of the bale of waste plastic on the supermarket floor was “an arresting image”, which made the problem very obvious.

Ultimately, she added, “each person is responsible for their own behaviour” though she believes a change in public attitudes was happening, reflected in greater acceptance of the need to reduce plastic and to recycle it where possible.

One shopper told The Irish Times she believes the store’s plastics initiative will make life considerably easier, especially when new charges on green bin recyclables are being introduced.

On Saturday’s “shop and drop protest”, which is taking place at supermarkets throughout Ireland, Mr Whelan says: “I think it’s important, and we wholeheartedly support the initiative. We will do everything we can to help. It’s something that needs to be addressed.”

Nolan’s will have bins at each checkout to help shoppers, he confirms, and will avail of the opportunity to outline how it proposes to play its part in shifting the balance from convenience and “force of habit” to minding the Earth by adopting a sustainable approach to shopping.