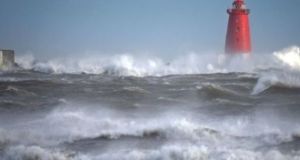 Highest temperatures will be between 11 and 15 degrees with fresh and gusty southwest winds. Photograph: Eric Luke

The warm and sunny weather conditions briefly experienced across the country last week have been replaced by outbreaks of rain and gusty winds.

Met Éireann has said highest temperatures will be between 13 and 15 degrees for the week with some sunny spells.

Monday will be mostly cloudy with outbreaks of rain and drizzle in the west and southwest gradually spreading further eastwards. The rain could occasionally turn persistent or heavy before clearing later on Monday afternoon to scattered showers, with some brighter intervals towards the evening.

Highest temperatures will be between 11 and 15 degrees with fresh and gusty southwest winds.

There will be showery outbreaks of rain with a few bright or sunny spells on Tuesday. The rain could occasionally turn persistent or heavy over the southern half of the country before clearing towards the east later in afternoon. Top temperatures will be 10 to 13 degrees and winds will be mainly moderate southwest to westerly.

Thursday will see scattered showers and sunny spells with highest temperatures around 9 to 11 degrees. It will be cooler on Thursday night with a small amount of grass frost likely.