Plastic: how much do we generate and how can we reduce it?

‘Shop and drop’ urges people to leave packaging in supermarkets

A "shop and drop” initiative aims to highlight excessive packaging by encouraging shoppers to politely remove packaging and leave it at the checkout of their local supermarket. 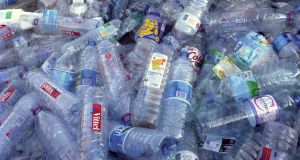 This weekend hundreds of supermarkets across Ireland are having to deal with large volumes of extra plastic and cardboard handed back by their customers.

Saturday’s “shop and drop” initiative is to highlight excessive packaging, according to environmental groups, who are urging shoppers to politely remove packaging and leave it at the checkout. It is being organised by the “Sick of Plastic Campaign”, a joint initiative by VOICE and Friends of the Earth Ireland (FoE).

The day of action “gives voice to people”, by allowing them show their concerns about excessive use of plastic, and is far from being a token gesture, according to FoE director Oisín Coghlan.

How much plastic do we generate?

- Ireland is the top producer of plastic waste in Europe; generating an average of 61kgs per person every year - almost double what the UK produces.

- We produce the equivalent of nearly 2,000 water bottles, or 5,550 disposal coffee cups, per person annually.

- 30 per cent of the EU’s plastic is recycled (the equivalent figure in Ireland is 34 per cent); 39 per cent is incinerated, 31 per cent goes to landfills.

- China accepted 7 million tonnes of the world’s plastic scrap in 2016 - more than half of all the waste plastic exported globally that year.

- Up to 97 per cent of Irish plastic went to China because of our inability to deal with it at home up to 2017, before that market closed.

- 83 per cent of Dublin Bay Prawns have ingested microplastics.

How do you reduce plastic when shopping - 10 tips:

- Leave plastic and excess cardboard packaging behind at your supermarket either at the till or in a designated container.

- Try to buy loose fruit and veg - you end up buying less. You can limit non-recyclable packaging and food waste by only buying what you need - less food items go off.

- Make or buy reusable cotton bags, or put the produce loose in your own shopping bag.

- When there’s a choice, buy items with paper or cardboard packaging.

- Ask your supermarket to offer items such as pasta, rice and nuts in bulk, and bring your own containers for them.

- Do the same with meat, chicken and fish. Ask your butcher to wrap your purchases in butcher paper rather than plastic bags - or bring a reusable container such a piece of tupperware.

- Buy fresh bread if possible - or break open packaging and leave it behind.

- Where packaging is inevitable, favour hard plastic (which is recyclable) over soft film which is generally not.

- With toiletries: Use shampoo bars rather than plastic containers (though they are recyclable).

Any other advice on ditching plastic?

- Use the right bottle - instead of buying disposable plastic water bottles every time you’re on the move, why not buy a reusable one and fill it up before you leave the house, saving money and the planet? Also, check out refill.ie which shows where you can refill your bottles for free.

- Use the right coffee cup - buy a reusable coffee cup for takeaways. The vast majority of the 200 million takeaway cups we use annually are not recyclable here. Many coffee shops and cafes offer financial incentives for using your own reusable cups.

- Refuse plastic straws and ask bars and retailers to invest in paper straws instead. If you can’t give them up, switch to paper straws. They’re strong, biodegradable and a great alternative to plastic.

- Refuse single-use plastic coffee stirrers, cutlery and water cups all of which remain in the environment for hundreds of years.

- Use one durable bag - Grab a canvas bag that can be put in your handbag or pocket for shopping.