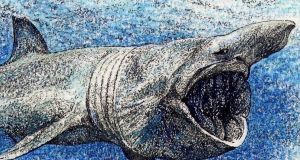 Basking shark. Between 1946 and 1997, the total cull from the northeast Atlantic population was more than 100,000 mature individuals, mostly female. Illustration: Michael Viney

Among memories still vivid, happily so or not, I am perched on a clifftop overlooking Achill Island’s Keem Bay in Co Mayo, some time in 1962, watching slaughter in the sea below.

Three currachs are angled closely around a net and something very big, dark and vigorous is twisting in between. Arms lift to strike downwards with harpoons. The big shadow stills among the meshes, and the basking shark is towed to a corner of the cove.

On a bike trip from Connemara, I had come upon a local folk industry about which I knew little. Its history went back at least 200 years to the flicker of oil lamps in cabin chimneys and the glow of street lights in 18th-century Irish towns.

Even after paraffin fed the lamps, basking shark oil was the richest source of squalene, an extra-fine industrial lubricant and cosmetic moisturiser for the human skin (mostly taken nowadays from the squalene in some plants).

As the world’s second biggest fish, next to the whale shark, Cetorhinus maximus can grow to 11 metres and weigh up to 4 tonnes. An exceptionally large and buoyant liver can weigh half a tonne and yield up to 400 gallons of oil.

Huge and harmless, sieving plankton from the waves and lacking any predator (except man), the shark takes up to 20 years to reach maturity and perhaps a few more gestating a handful of 2-metre pups. With sustained mortality from hunting, population falls.

By 1962, the Achill fishery for basking sharks had virtually collapsed after a decade of peak catches. In the early 1950s, Irish fisheries averaged 1,475 a year, but I was watching the death of one of perhaps 50 drawn in late spring to the plankton-rich swells around the Achill headland.

Between 1946 and 1997, the total cull from the northeast Atlantic population was more than 100,000 mature individuals, mostly female. The original, pre-fishery number of Cetorhinus maximus could only be guessed at.

Today, with wide protection from hunting, it is considered “vulnerable” in the Pacific and “endangered” in the northeast Atlantic. One genetic study suggests the global population may now hover at around 10,000.

Its conservation rests on the precautionary principle that lacking knowledge about a threatened species is no defence for lack of action. There was certainly plenty of mystery in this giant creature’s life. Where, for one thing, did it go in winter?

Facts began to flow with the use of pop-up electronic tags. Darting was made easier by the shark’s placid surface feeding in summer waters, its dorsal fin stuck up like a sail. Data fed to satellites reported on patterns of foraging and migration and corrected some long-held assumptions.

One was that the sharks must belong to separate populations on the continental shelf off Ireland and beyond; perhaps the Achill fishery had simply exhausted its local supply? But a shark tagged off the Isle of Man in 2007 released its tag off Newfoundland, having swum more than 9,500km and reached a record depth of 1,264 metres. This spoke for a transatlantic reach and far-from-local lifestyle.

Another assumption, current for some 40 years, was that the sharks spent the winter hibernating on the seabed below the continental shelf. But tagging showed that even at great depths they are still active, often moving vertically close to the edge of the shelf. They may be following the swirling layers of zooplankton that rise to the surface at night and sink again at dawn.

Along with such second-hand but precious clues to lifestyle have come first-hand and sometimes dramatic observations.

During watches off Malin Head, Co Donegal, in 2015, a “hot spot” for basking shark gatherings, a research team led by Emmett Johnston secured videos of the giant fish bursting from the sea in brief and ponderous flights of breaching – no fewer than 600 such acts over 90 hours of observation (photo and video links at baskingshark.ie).

In a subsequent paper in the Biology Letters of the Royal Society, “Latent power of basking sharks revealed by exceptional breaching events”, the team saw this capability as “incongruous to the famously languid lifestyle as filter-feeding planktivores”.

They went on to compare it to the spectacular breaching of great white sharks off South Africa. This found the Irish basking sharks exiting the sea with the same vertical velocity of some five metres per second and a comparable use of energy, but at a far bigger cost to its daily metabolic supply.

The favoured explanation is show-off mating behaviour. Courtship of the sharks, peaceably swimming in pairs or nose to tail, is a well-watched ritual at summer plankton gatherings off the Isle of Man and Cornwall.

Just now and then, as reported to TripAdvisor, a solitary basking shark may be spotted from the cliff at Keem Bay, gaping after copepods right into the cove’s bright shallows.