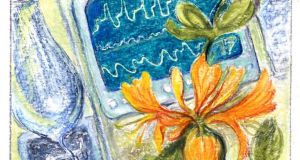 It seems that a policy originating in 1996 has crept into practice under a somewhat dodgy clinical cover. Illustration: Michael Viney

The clap of thunder that shattered the sky above the hospital, arriving from nowhere at 3am, was quite the loudest anyone in Ward B had heard in their lives. I also took it a bit personally as a possible guffaw from the gods about last week’s column, in which I let some worst-case scenarios of climate change have their way.

Living with heart failure and its intermittent little traumas is a common not-so-good scenario of old age. But I can vouch for Castlebar’s hospital as an oasis of clinical devotion and warm and friendly nursing. And few nights in Ward B can also let one tune in to the generally amiable interplay among male veterans of life in rural Mayo.

The room is not, however, as one might imagine, the most visually inviting of spaces, its walls bare of pictures, the windows open only to views of more cement walls and one high patch of sky. And like most other Irish hospitals now, the presence of flowers is prohibited “to ensure optimum hygiene”.

The crisis in hospital infections and resistant bacteria has brought fierce new discipline to ward practice: a constant change of gloves between patients and interminable washing of hands. Even the loo door handle now sprays disinfectant on the fingers.

In such a sterile environment, the fear that the stagnant water in flower vases could breed germs has gained some value in banning them – but not much that a squirt of something would not easily disarm. The many sounder reasons for ruling out flowers are obvious to anyone watching peak nursing operations and the daily logistics of bedside space.

In much earlier, unrelated and more clinically sanguine times before the ban, a close fragment of nature did actually mean a lot to me. The flower-pot allowed to remain on my bed-table held a primrose plant in full flowers and violets blooming in green moss. It hardly needed the injunction to “Get well soon” – this sprang out from the leaves and petals, the living hedge-bank fragrance. They all did wonders for my little red cells.

Against this might be set a rather grandiloquent, exotic bouquet sent by friends to an intensive-care ward in Galway. A solitary blaze of colour, it was installed on a high shelf, remote from the beds, for semi-conscious contemplation.

My modest little pot was also very different from the flood of supermarket bunches that might well arrive now, with peak visitors all expecting – what? nurses to find the vases and water and somewhere to put them among the patient’s array of personal electronics, the iPhones, on bed-tables needing space for meal trays and water jugs – tables that must be swung around, pushed and pulled?

And who is to change the water and how often in hard-pressed ward regimes? Some hospitals have compromised by admitting flowers “contained in oasis [a plastic sponge], plus container”, which hopefully rules out the taller and more inescapably pungent of Tesco lilies.

The therapeutic worth of hospital flowers has been strongly endorsed as boosting patient wellbeing and speeding up recovery. That people find them wonderfully calming is backed up by clinical studies of effects on blood pressure, muscle tension and even awareness of pain. Much, I suppose, must also depend on patient temperament and cultural milieu.

As for the risks to hygiene, a study by hospital medics in the Journal of Infection Prevention in 2005 concluded that “Although the water in which flowers stand can become a reservoir of potentially pathogenic bacteria, there is no evidence that they have ever caused hospital-acquired infections, and simple precautions can be taken to reduce potential risks. Banning flowers from general wards is not popular with the public and is unnecessary according to the evidence available.”

In 2007, as reported in the British Medical Journal, the UK Department of Health acknowledged that it was “not aware of any instance of healthcare-associated infection being traced to cut flowers in the hospital ward setting”. It seems that a policy originating in a orthopaedic ward of an Aberdeen hospital as long go as 1996 has crept into practice under a somewhat dodgy clinical cover, while the real and practical hassles of coping with flowers in a stressed-out nursing world have been the real motive for expelling them.

So that was part of what was buzzing through my head, as I was driven home through a storm, my lungs restored. On arrival home, I found all the daffodils bashed flat. They will stand up again and go on growing until they wither, which seems not the worst way to proceed.

1 Leaving Cert : 6,500 students awarded lower grade due to code errors
2 US presidential debate: who won, was it any good, were there any surprises?
3 Dublin needs ‘significant improvement’ in Covid case numbers, Oireachtas committee hears
4 Joe Biden is dodging the culture war to focus on class – and he’s right
5 CPE superbug being detected at record levels, says HSE
Real news has value SUBSCRIBE