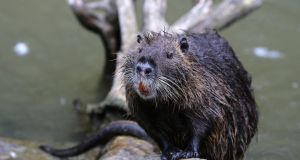 A coypu in a park in western Germany. The rodents carry several diseases harmful to humans and domestic animals. Photograph: Yann Schreiber/AFP/Getty

Waterways Ireland has warned the public to be on the alert for a very “large invasive rodent” species which has been spotted along the Royal Canal in Dublin.

Sightings of coypu, a semi-aquatic creature with bright orange teeth, a long cylindrical tail, and webbed back feet have been reported near the Ashtown area of the canal close to Castleknock.

The rodents, which can be up to a metre long and weigh up to 9kg, carry a number of diseases harmful to humans and domestic animals.

Waterways Ireland has issued an “invasive species alert” and warned the public “not to engage” the animals or make any attempt to trap them but to report any sightings, with photographs where possible.

Coypu are “highly invasive impacting on wildlife, river and canal bank stability and is a pest of agriculture crops”, Waterways Ireland said.

“Eradication programmes can cost several millions of euro and are not always successful.”

“Its appearance is similar to a very large rat; it could even be mistaken for a bulky otter at first sight,” Waterways Ireland said, but unlike an otter it does not have a fur tail but a “long rat-like tail”. Coypu are vegetarian, and particularly like carrots and parsnips.

The “invasive alien species” originates from wetlands in South America, and is thought to have arrived in Ireland about five years ago. It is believed the animal was introduced as a novelty attraction to a pet farm in Cork but some escaped in 2014 and began breeding on the outskirts of Cork city.

In 2016, 10 coypu were shot on the Curraheen river on the outskirts of the city. Sightings should be reported to Waterways Ireland and National Parks and Wildlife Service which will undertake “eradication measures”.

Judge does not see reasonable prospect of south Dublin care facility surviving 17:17
Covid-19: Taoiseach says next two weeks are going to be critically important 17:12
Man (50s) killed in single vehicle crash in north Co Dublin 16:59
No plan for legislation to close meat plants in cases of Covid-19 outbreaks 16:57
Accused claimed ‘I know what it’s like to be a murderer’, trial told 16:08