North Dublin development will be frozen by ‘monster sewage plant’

Hotel next to plant used for homeless families 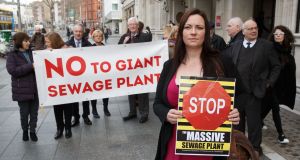 The location of a “monster sewage plant” and “sludge terminal” in Clonshaugh will freeze the future development of Dublin’s north fringe, Independent TD Tommy Broughan has told an An Bord Pleanála hearing.

Irish Water is seeking permission from the board for a €500 million sewage plant at Clonshaugh, east of Dublin Airport, which would be the second-largest sewage works in the State after the Ringsend plant in Dublin 4.

A hotel adjacent to the site is being used to house homeless families, Sinn Féin councillor Larry O’Toole told the hearing.

The site is in Fingal, immediately north of the border with Dublin City Council. The development plans of both local authorities had designated the area at and surrounding the sites for high-tech employment, residential and commercial development, Mr Broughan said.

“No plans ever remotely considered giving any planning rationale for what my constituents call a monster sewage plant and massive sewage sludge terminal,” Mr Broughan said.“Constituents see the proposal as a disaster for the future planning of our region.

“This Irish Water proposal on nearly 30 hectares wrecks any legible or sustainable planning of the North Fringe.

A previous plan published in 2005 to develop the plant at Portrane was the “most appropriate proposal”, he said, but other sites in Fingal near Lusk were also “immensely preferable to Clonshaugh on planning, engineering, environmental and cost benefit grounds”.

Mr Broughan referenced a tank failure last month at the Ringsend plant that caused a “large plume of sewage to be discharged into the Liffey”. Very unpleasant odours last summer along the Sutton coast had been attributed, by residents, to the Ringsend plant.

The potential contamination of the marine environment in Baldoyle Bay was “unconscionable”, he said. The bay was designated as part of a Unesco biosphere in 2015.

Sinn Féin councillor Larry O’Toole said that of all the sites proposed for the plant, Clonshaugh was the closest to a large population with hundreds of homes in the immediate vicinity.

In addition, he said the closest development to the site was the Clayton Hotel, one floor of which was being used to accommodate homeless families. “These families will unfortunately be living there for the foreseeable future.”

Mr O’Toole highlighted concerns about the environmental impact of the plant in the immediate area and along the coast. “In recent months there have been issues regarding water quality, and it is likely that this plant would deteriorate bathing water quality in the bay even further.”