Straws in the wind of a storm that threatens us all

The Uninhabitable Earth a salutary warning for our increasingly threatened times 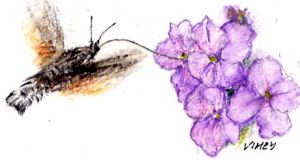 Some exotic wings appeared in Irish gardens at the peak of last month’s surreal incursion of spring.

In Dublin’s Ballybrack, a hummingbird hawkmoth was whirring away at early flowers. In Cork and Limerick, two painted lady butterflies spread their sun-bleached beauty.

These insects, normally summer migrants, had either stayed in Ireland since last year or been carried up from southern Europe in the pulse of warm Moroccan air. Either way, their appearance spoke of climate change, the new and discomforting background to our lives.

In this column 20 years ago, I was moved to ask: “If a pet day arrives in winter, shall I bask in the stillness and warmth and the sun’s enamelling with the same, almost pagan, gratitude, or shall I feel, with McKibben, ‘well that’s fine, but it isn’t nature’?”

Bill McKibben is the American writer whose 60-page New Yorker essay The End of Nature (later a book) was such a seminal shock in pointing out that man-made atmospheric changes had put an end to nature’s independence.

For all its ungovernable wilfulness, there had been a continuity of seasons, a seemingly steadfast limit to climatic extremes, to serve as an anchor for the human psyche. Now, wrote McKibben, “The uncertainty itself is the first cataclysm, and perhaps the most profound”.

Another, however, was his conclusion: “There is no future to loving nature.”

It struck home bitterly with me, writing, each week, as if there was. Loving nature and learning more about it would surely improve the future of humankind.

Now another book by a science writer has brought serious engagement from climate scientists and commentators. Written by David Wallace-Wells, deputy editor of New York magazine, The Uninhabitable Earth begins as ominously as it means to go on: “it is worse, much worse, than you think”.

Some extreme weather events could let me imagine, however darkly, a worst-case scenario for Ireland a good few decades after I’m safely dead. Hurricanes will have left the west coast a place where no one wants to live, at least in winter: the Wild Atlantic Way gone berserk. The forests have blown flat, the midlands are the flooded wetlands they were shaped for, the coastal cities are swamped by storm surges, if not drowned.

Wallace-Wells, pursuing known trends and likely unknowns to a doom-laden end, adds a sea level lifted by metres and Ireland robbed of the Gulf Stream’s winter warming. Elsewhere, as he projects, humanity expires in insupportable heat.

For the thrust of his research, go to his earlier magazine article, marked up with his responses to scientist critics (google “The Uninhabited Earth annotated edition”). And for dire trends in the loss of polar ice, watch the YouTube discourse from James Hansen, a much respected, if unforgiving, climate scientist, at climateireland.ie.

Is offering worst-case scenarios a good way of scaring people and governments into action? Or do they, like climate change denial, hold action back – or, perhaps even worse, suggest the cause is essentially lost?

There’s good, straight discussion of this among climate scientists themselves in an open thread, “The best case for worst case scenarios”, at realclimate.org. In the modellers’ minefield of climate change, how far should scientists consider the social consequence of publishing their conclusions (or, in Trump’s America, the denialist backlash)?

“To get to the worst cases,” concludes lead writer Stephen Schneider, “we have to be incredibly stupid and incredibly unlucky. Dismissing plausible worst case scenarios adds to the likelihood of both . . . Indeed, the true worst case scenario might be one where we don’t venture out from our safe harbours of knowledge to explore the more treacherous shores of uncertainty.”

My own advanced age keeps the worst predictions at a somewhat greater distance, their mechanics taking on the lure of superior science fiction. It’s no longer so hard to think it possible that the great human experiment will doom itself to extinction, leaving a mangled planet to lick its wounds.

Meanwhile, the children march, as they should and as their brave genes demand. And we go on living as if someone else is bound to do something about it. Electric cars are one solution, if you can afford one. But what about the world’s buses, lorries, trains, container ships, airplanes . . . the whatabouts abound.

In the 20 years since McKibben, loving nature has never been better served and promoted or given more chance of a future. The recent news about the planet’s loss of insects is, indeed, a worst-case scenario. In Ireland, at least, the response has been not fear or resignation, but people planting more flowers for the bees.

To secure a durable future for humankind will need unimaginably more.