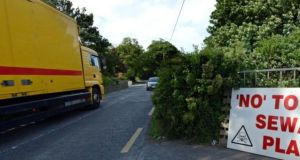 The planned sewage treatment plant at Clonshaugh has been the subject of more than 14,000 objections from local residents. Photograph: Eric Luke

Plans for a €500 million regional sewage treatment plant in Dublin, which have been the subject of more than 14,000 objections from local residents, are to come before An Bord Pleanála on Wednesday.

The controversial project at Clonshaugh, east of Dublin Airport, would serve 500,000 people across the north of the county and would be the second-largest sewage works in the State after the Ringsend plant in Dublin 4.

Residents opposing the plant say it will be four times the size of Croke Park, will jeopardise the health of people, wildlife and plants, and will increase pollution in Dublin Bay. Among those who have objected to the plan are Minister for the Environment Richard Bruton, Minister of State for Disability Issues Finian McGrath and TDs Tommy Broughan, Clare Daly and Seán Haughey.

Irish Water said the plant, due to be operational in 2026, will be a “vital development to protect public health, safeguard the environment and support the sustainable social and economic growth of the greater Dublin area”.

A plan for a plant to treat sewage from Dublin city and county as well as parts of Meath and Kildare was first proposed almost 20 years ago but its development has been the subject of sustained opposition.

In 2005 the Greater Dublin Strategic Drainage Study, commissioned by Fingal County Council on behalf of the four Dublin local authorities, identified Portrane in north Co Dublin as the best location for the plant.

Opposition to the selection of Portrane was rapidly organised and extremely vocal with actor and local resident Stephen Rea among those opposing it.

After Fingal councillors voted against the Portrane proposal, the plans went back to the drawing board and in 2011 nine potential sites, all in Fingal, including Portrane, were selected for assessment.

This was narrowed down to three sites a year later, two of which were near Lusk, and one in Clonshaugh, just north of Darndale, which is the site closest to the Dublin City Council area.

Clonshaugh was ultimately chosen in mid-2013 and an application was expected to by lodged with An Bord Pleanála by Fingal County Council the following year. However, Irish Water in 2014 took over responsibilty for the project and lodged an application to An Board Pleanála last year.

In addition to the Clonshaugh plant, the project will involve the construction of an underground orbital sewer from Blanchardstown to Clonshaugh, to intercept existing flows to Ringsend; a pumping station at Abbotsown; and an outfall pipeline to return the treated water to the Irish Sea.

There will be a regional sludge treatment centre at Clonshaugh and an associated organic matter storage facility at Newtown near Kilshane Cross.

A number of residents opposing the plant have said the sewage will not be treated to the same standard as at the Ringsend plant, and have questioned plans to tunnel through the grounds of Connolly Hospital in Blanchardstown as part of the sewer construction.

The planning hearing begins at the Gresham Hotel on O’Connell Street at 10am and is expected to last for at least a week.