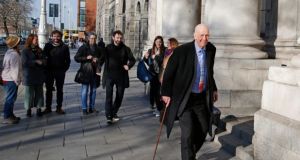 An environmental group has been given leave to judicially review a decision by the Legal Aid Board to refuse to consider funding for their legal challenge to the Government’s National Development Plan and the National Planning Framework.

Friends of the Irish Environment (FIE) alleges the plans, part of Project Ireland 2040, were not properly assessed environmentally; notably in relation to evaluating climate change impact.

Leave has been granted by Mr Justice Charles Meenan in the High Court, following an application by barrister John Kenny (instructed by Fred Logue Solicitor) on behalf of FIE.

FIE made their application for assistance in April 2018. While the Legal Aid Board accepted its limited income and assets qualified them for aid, it ruled its aid was only available to individuals and not companies.

FIE was established in 1997 and is a company limited by guarantee and a registered charity with an aim of ensuring EU environmental law is implemented in Ireland. It has brought some of the most high profile environmental cases before the courts in recent years.

In its challenge, FIE cites the Irish Interpretation Act 2005, which states the word “person” shall be “read as importing a body corporate as well as an individual”. The group contends the Constitution gives a right to access the courts including circumstances where it is not in a position to pay its lawyers.

FIE also cites the EU’s Charter of Fundamental Rights and the Aarhus Convention, which has been ratified by Ireland, which requires members to “consider the establishment of appropriate assistance mechanisms to remove or reduce financial and other barriers to access to justice”

“The case is fundamental not only to the rights of NGOs but any group of citizens defending their own environment to whom court costs are prohibitively expensive and so act as a barrier to access to justice,” said FIE director Tony Lowes.

“Very often when decisions are challenged, the State and other public bodies have virtually unlimited resources to engage lawyers and consultants, putting applicants at a significant disadvantage,” he added.