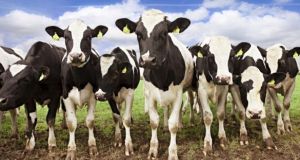 Agriculture is the largest contributor to Irish carbon emissions by sector; accounting for 33.3 per cent of national emissions in 2017. Photograph: Getty Images

The most profitable Irish farms are the most efficient in minimising greenhouse gas (GHG) emissions, according to Teagasc’s sustainability report for 2017.

Using data compiled through its national farm survey, the report tracks the performance of Irish farms in terms of economic, environmental and social sustainability. Its environmental focus is on the level of GHG emissions being generated at farm level.

The report confirms the income gap between dairy farms and other farm types in Ireland, which has accelerated with the growth in Irish milk production in recent years.

While the main element of the survey is measurement of economic performance, it has been expanded to include a growing range of environmental metrics including farm level GHGs.

This year’s report also includes metrics for ammonia emissions for the first time – in addition to nitrogen and phosphorus levels, which can threaten the aquatic environment.

Agriculture is the largest contributor to Irish carbon emissions by sector; accounting for 33.3 per cent of national emissions in 2017.

However, the report also shows emissions of GHGs and ammonia over time are increasing on farms that are growing in size and are the most efficient, which is invariably on dairy farms – this is linked to the volume of milk being produced and herd size, he said.

The findings “suggest improvement in economic sustainability can be achieved side by side with improvements in emissions efficiency”, he added.

The data will be valuable for policy makers and the agri-food industry in understanding how best to focus continuing efforts to address farm emissions and contribute to national targets for emissions reductions, said Teagasc director Prof Gerry Boyle at a conference in Ashtown, Co Dublin.

The report is representative of about 90,000 farms in Ireland, but does not cover the smallest farms in terms of economic size, or large pig and poultry units.

The conference heard Teagasc is to extend its evaluation of sustainability by measuring farm habitat biodiversity on farms.

Teagasc ecologist John Finn said the days of saying biodiversity was “not measurable or not important enough to be measured” no longer applied.

Irish farmers were not given sufficient credit for their role in protecting habitats, he added.

“All too often in the sustainability debate, the climate and the environment take precedence. It is difficult for farmers to continue to be green while they’re in the red. In this context, the Teagasc sustainability report must be welcomed,” he said.

While showing overall increases in emissions, it also highlighted “emissions per kilo of output” is decreasing, as output increases and efficiency improves, he said.

“This emission-efficient grass-based model of food production provides a solid platform for the sustainable development of Ireland’s agriculture, especially in the context increasing global demand for the types of sustainably produced food Ireland has to offer,” Mr Healy added.

He called on the Oireachtas Committee on Climate Action and the Government, when preparing their action plans on climate change, to “support the full implementation of the Teagasc ‘climate road map’, rather than increasing costs and taxes on the sector”.