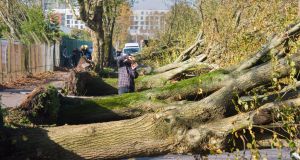 Storm Ophelia was the farthest east major hurricane on record in the Atlantic Basin, a report from Met Éireann says.

The national meteorological service said while Storm Ophelia was a “significant” weather event that led to widespread disruption in Ireland, no wind or wave records were broken.

It published a report into Storm Ophelia on Tuesday, exactly one year after it struck Ireland.

Storm Ophelia made landfall over Ireland as an “extra-tropical storm” on the morning of October 16th, 2017 with wind speeds of up to 156km/h at Roche’s Point station in Co Cork.

The storm caused major power outages, coastal flooding while all schools and many businesses closed for the day.

Met Éireann said traffic on its website and mobile apps during the storm were the highest recorded. There was a total of 4.32 million page views on October 16th or 3,000 per minute. The peak was approximately 6,500 page views in one minute.

The report said Ophelia became a hurricane on Wednesday, October 11th and a major hurricane (defined as Category 3 or higher) during October 14th, just south of the Azores.

As it accelerated towards Ireland it began to weaken and completed an extra-tropical transition early on October 16th.

Met Éireann issued a status red warning for parts of Ireland on October 14th, which extended to all areas the following day. A status red is the highest of the three alert categories.

“The utilisation of improved high resolution forecast models by Met Éireann were instrumental in declaring a ‘Status Red’ warning,” the report said.

“This in conjunction with the State National Emergency Co-ordination Group advisory ensured that every effort was made to keep associated damages and losses to a minimum.”

Met Éireann said while Ophelia was a significant weather event, the most powerful winds and wave heights did not surpass those of Hurricane Debbie in 1961, when gusts over 177km/h recorded at Malin Head, Co Donegal.

It said while all counties experienced some disruption, there was widespread damage in the south and west of the country.

“Fallen electricity poles and electric cables left 300,000 households, 385,000 premises in total without power. This in turn affected other infrastructure and services, such as water treatment and wastewater systems,” it said.

“ESB Networks and Irish water worked together for over a week after Storm Ophelia to restore electricity and water supply, prioritising vulnerable customers and co-ordinating with the Principal Response Agencies to provide humanitarian assistance to those left without water and power.”