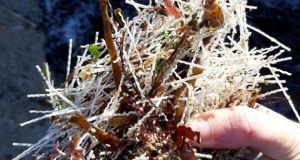 Images of the plastic pieces found on the shore at Dún Laoghaire and Sandycove last year show tiny lengths of thin, flexible material about the length of a little finger. File photograph: Gráinne Grehan

Plastic shards have reappeared on the south Dublin coastline nearly a year after thousands of pieces of plastic first washed up on beaches in the area.

A volunteer clean-up group discovered an array of plastic shards on Sandycove beach during a clean up on Thursday ahead of the arrival of Storm Lorenzo. Group member Margaret De Brun posted photos of the plastic pieces on her Facebook page with the message “they haven’t gone away you know”.

Some 70kg of plastic debris being used in the reconstruction of the Dun Laoghaire baths was released into the waters around the Forty Foot and Sandycove areas in early November 2018. The main contractors redeveloping the Dún Laoghaire baths, the SIAC/Mantovani Group, acknowledged that the plastic fibres had come from its site and carried out a clean-up of the area.

The group said the fibres were used primarily to bind and strengthen concrete which was placed at low tide on the sea bed to form the foundations for pier works.It added that the fibres were chemically inert and alkali proof, and about 1mm in diameter and 50mm in length.

All work on the baths site was temporarily stopped following the discovery last year while underwater, air and shoreline assessments were carried out to assess the full extent of the incident. Some 50kg of plastic was recovered during the clean-up operation.

Some of the plastic, which was the size and shape of a needle, appeared the following week as far away as Donabate beach in north Dublin. Birdwatch Ireland expressed concern at the time for welfare of thousands of Brent Geese, ducks and wading birds along the east coast

The Dun Laoghaire baths development, which will include a public café, a workspace for artists, a new jetty and landing points for canoes and kayaks, is due to be complete by late spring 2020, according to Dun Laoghaire-Rathdown County Council.