‘They ruin picnics’: Our feelings about wasps will need reform

We may not like then as much as bees, but without wasps, we could be ‘overrun with spiders’ 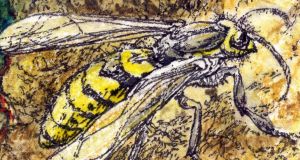 “Wasps!” A friend visiting from Cork city was quite sure what I should write about next. Her one word rang with feeling.

Cork, with southern warmth, may have had more than its share of an Irish wasp population boosted by climate change. In June in the Irish Examiner, naturalist Damien Enright recalled once quaffing the last dregs of beer from a glass that held “a drinking party of wasps”. He had managed to spit them out before they stung and his column was a generously brisk defence of wasps, their species as vital as bees to the running of the natural world.

As climate warms, in fact, their role in pollination and pest control will take on new importance. But in arguing for protection, human feelings about wasps will need understanding and reform.

A major campaign for this is led by Dr Seirian Sumner, an evolutionary biologist at University College London. With Prof Adam Hart, Sumner set up the Big Wasp Survey, a citizen science project sponsored by the Royal Entomological Society. To sample populations of social wasps across the UK, thousands of citizens have been hanging up wasp traps in their gardens – old plastic bottles with a little beer in the bottom – and returning the dead insects for identification.

Last summer, for example, the traps yielded some 18,000 wasps, mostly from English gardens in built-up areas. This summer’s catch is probably even higher. But just as important as the data on the distribution of species has been the chance for people to learn more about them (at bigwaspsurvey.org).

A deep exploration of attitudes has been the study “Why we love bees and hate wasps”, by Sumner and others, published last year in Ecological Entomology (online at DOI: 10.1111/een.12676). This analysed online responses from some 750 people (mostly British) in 46 countries. They were asked how they felt about butterflies, bees, wasps and flies in choosing from a wide range of positive and negative words.

Unsurprisingly, the results confirmed a universal dislike of wasps. “Words used to describe wasps are emotive and negative,” says the study (“annoying, dangerous, angry”), “whilst those describing bees are functional and positive.”

Unsurprisingly, too, wasps are disliked because of their sting, which is even “stronger” than bees, thought Aristotle. More recent research has put them at the peak of “the Schmidt pain scale” of 0.5 to 4.

It’s unfortunate that human fear of being stung springs from encounter with a comparative handful of the social wasp species. The vast majority of wasps – some 75,000 species – lead solitary lives. Countless more are the small, largely stingless and parasitic species that go publicly unrecognised but also have huge, controlling impact on pest species such as caterpillars.

The risk of stings also deters young scientists from making wasps their special interest. Sumner’s team confirmed this from searching decades of peer-reviewed scientific papers and conference proceedings. Such lack of research, she claims, holds back knowledge and public understanding of the ecosystem services of wasps compared with those of bees.

Even committed researchers appreciate the fear of wasps. She quotes from two American scientists, Evans and Eberhard: “. . . they terrorise housewives, ruin picnics and build large aerial nests that challenge fleet-footed, stone-throwing boys the world over.” The workers that intrude on picnics are after a last sugary binge before they die.

And yet, at a time when all insects are under threat from climate change and habitat loss, wasps with stings are even more vital to the balance of the natural world.

“Without wasps, the world could be overrun with spiders and insects,” flatly states the UK’s Natural History Museum. “Each summer, social wasps capture an estimated 14 million kilos of insect prey such as caterpillars and greenfly.”

They have, says Seirian Sumner, “huge potential through managed exploitation for biological control”. The alternative to pesticides is worth attention.

From Brazil, where pesticide use is huge, comes a new study of management options for small farms and gardens. Its main suggestion is transferring wasp colonies (by night) to artificial shelters closer to crops. This could sound marginally less challenging with smaller colonies of paper wasps, the Polistes, whose homes hang from branches and whose stings are mainly defensive.

But the bigger colonies, underground, are those of Vespinae wasps like those in Ireland. Moving these, suggests the study, is “a more delicate process” involving excavation and the use of unspecified “anaesthetics” (online at DOI: 10.3390/insects10070192).

The common and German wasps of Ireland also mostly build nests underground (which badgers avidly plunder for combs of larvae and eggs). The paper nests hanging in sheds or roof spaces can be of either species and won’t be used again. The queen wasp hibernates and starts a new colony in spring, breeding workers to make a new nest.

Leave it alone if you can. Just give the late-summer beer glass a glance before you swig the last drop.