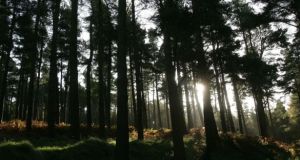 At 11 per cent (770,000 hectares), Ireland has one of the lowest levels of forest cover in Europe. Photograph: Alan Betson

A fundamental shift in forestry policy proposed by the Green Party, away from heavy reliance on conifers towards a focus on native woodlands, is likely to get sufficient cross-party support to defeat the Government.

The move contained in a motion put before the Dáil on Tuesday calls for the Government to push for a more diverse “continuous cover forestry” model, supporting a wider range of forest types including semi-wild areas and forestry on farms. The current “clear-fell plantation model” is dominated by Sitka Spruce production.

Sinn Féin, Fianna Fáil and some independents have indicated they will support the motion, raising the possibility the Government will be defeated if they oppose it when a vote is taken on Thursday. If adopted as Government policy, it would have far-reaching consequences for State-owned Coillte and Bord na Móna, which between them own the largest land block in the country.

Rather said than focusing on “short rotation plantations and lumber production” which were successful in the past, the new strategy was needed “to address the biodiversity and climate crises that we face”, said Green Party leader Eamon Ryan.

A rebalancing of forest premiums and payments to support this strategic shift would be necessary, Mr Ryan said, to allow for restoration of large areas of permanent natural woodlands – including new grants so every farmer could grow a special hectare of native woodlands over the next five years.

The Government recently outlined a new planting target of 22 million trees every year for the next 20 years with short-rotation conifer plantations accounting for 70 per cent of new afforestation, with the remaining 30 per cent being broadleaf trees.

Mr Ryan said afforestation would have to double for Ireland to meet its obligations under the Paris Agreement on climate change.

Central to the motion is development of a national land use plan “which plots out how we can manage all our land in this better way”, said deputy leader Catherine Martin. The change in forestry policy would provide “a nature-based solution”, she added.

Such a plan was needed to also determine on a scientific basis how to manage flood waters, uplands and mountains, while facilitating re-wilding to restore biodiversity, Mr Ryan added. It meant not growing all the trees at any one time, allowing light into forests, planting on 60- to 80-year cycles – and possibly even reintroducing wolves to Ireland to have a better predator balance.

Minister for Heritage Josepha Madigan said her department had no plans to reintroduce wolves. She said in a Twitter post that the reintroduction of a large predator, which had been absent for some 250 years, could undermine existing conservation programmes.

The motion claims the current approach can have “negative impacts” on biodiversity (putting pressure on key bird species in particular) and water quality due to nutrient run-off and acidification, as well as tarnishing landscapes.

Speaking at a briefing on the motion, Irish Wildlife Trust campaign officer Pádraic Fogarty said it was possible to achieve 30 to 40 per cent forest cover using native trees predominantly. The Paris Agreement meant more had to be done, beyond getting out of fossil fuels. There was an emphasis on carbon capture and storage technology, but an effective option was “in existence for 200 million years; trees and other vegetation”.

He strongly favoured rewarding farmers under CAP reform for not allowing livestock on their land, and ensuring forests restore themselves naturally. Ireland’s uplands were the obvious place for this to happen, especially when boglands needed to be restored and not switched into growing trees.