Spot the difference: how Clare Island has changed in 100 years 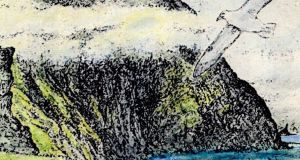 A shade too big to be mysterious, a bit too near the shore to seem utterly remote, Clare Island still has an iconic presence. Its arching silhouette, seen against the sunset from the shore around Clew Bay, Co Mayo, is at one with St Kilda or Lofoten in its massing of stubborn rock.

A new book from the Royal Irish Academy celebrates what until now has been an arcane, if distinguished, claim to fame. Few places on Earth, and none elsewhere in Ireland, have yielded such a concentrated inventory of knowledge about the natural world.

At the start of the 20th century and almost a century later, two remarkably intensive surveys of the island’s natural and cultural history were mounted by the Royal Irish Academy. These generated scores of papers and volumes for a scholarly readership.

In the second survey, almost a century later, the social gap was far less and the cultural aims of research far more evident

In the first survey the scientific enterprise and the lives of the people stayed largely apart (an existing hotel had been essential). The islanders coined the term “Praegers” for almost 100 field scientists, Irish and foreign, seen out roaming the landscape and kneeling down in the rain – recognition that the naturalist Robert Lloyd Praeger was mainspring and director of the enterprise.

In the second survey, almost a century later, the social gap was far less and the cultural aims of research far more evident. The book is couched in everyday narrative language. Distilling the findings of both RIA surveys, it weaves the island’s human heritage and future with the changes in the island’s natural world.

Clare Island, a large-format paperback (RIA, €40), is by ecologist John Feehan, author of important and readable books on wild plants, Ireland’s bogs and farming history. His easy prose is interleaved with the book’s rich and often fascinating illustration.

The island chosen by Praeger for such pioneering scrutiny was marked by the Famine’s social devastation and its later remaking by the Congested Districts Board. “Nowhere else,” Feehan writes, “does the landscape so visibly and dramatically evoke the transformation that occurred in the west of Ireland.”

Much of the lower land was ridged and furrowed by intensive cultivation, now grassed over. A patchwork of arable fields drew winter flocks of thrushes and blackbirds from the mainland. They don’t come now, and nor does the once-common corncrake.

In Praeger’s survey, the drier upland commonage on nearly half the island bristled with heather, cover for woodcock, red grouse and hares. By the time of the second survey, sheep subsidies and overgrazing had worn the same ground bare.

Where even sheep tread carefully, on the lofty, precipitous sea cliffs of Knockmore, Praeger used his exceptionally “good head” for heights to study beautiful Arctic plants, their cushions clothing ledges right down to the sea.

Many remain today, when botanists may be less daring, but a quarter of the island’s flora recorded by Praeger have disappeared. New plants have arrived and garden escapes are among them.

A team of specialists took 15 years to study the amazing diversity of the island’s freshwater algae. They recorded well over 700 species, making Clare one of the world’s few known hot spots of such variety. It is impossible, writes Feehan, to “convey the wonder of the lives of algae in words; some of them you might not even recognise as living things”.

The island has a unique natural and cultural heritage worth conserving

In a seemingly shorn landscape, he agrees, “it can be hard to believe that Clare Island is home to more than a thousand different animals”. Many live on the shore or in the sea, and study by scuba divers among forests of kelp examined organisms unknown to the early survey, which had to rely on offshore dredging.

The lives of the islanders have changed radically since then. Down to the middle of the last century, most farm families remained largely self-sufficient, with gardens for vegetables, a few cows for milk, poultry and an occasional pig.

Today, all food is purchased and there is total farm dependency on EU support. With this dependency, says Feehan, came “an ever-rising threshold of expectation in relation to comfort, security and choice”. By 2016, as noted elsewhere by Diarmaid Ferriter, half of Clare Island’s properties were holiday homes.

Nonetheless, as Feehan and others feel strongly, the island has a unique natural and cultural heritage worth conserving. Its Gaelic glories leave their mark in the abbey and Granuaile’s Castle, but much of the land will need ecological restoration, for which research is already under way.