Since previous floods, locals have been unable to get insurance 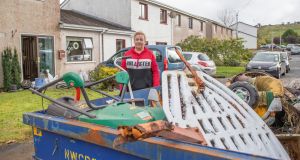 Sheena Culloo outside her Clarendon Drive home in Donegal town with some of the furniture and equipment destroyed by the flooding. Photograph: North West Newspix

A Donegal woman whose home was devastated by floods brought by Storm Lorenzo says she can’t bear to think about what the future will bring.

Sheena Culloo from Clarendon Drive in Donegal Town was awoken at 6am on Friday when floodwaters rushed into her home.

Heavy downpours had hit the south Donegal region in the early morning.

“The water was coming in fast, back and front,” she said. “It reached up to two inches by the time it stopped.”

As fire services came to assist locals, the rush was on for Ms Culloo to move furniture upstairs and save pieces from irreparable damage.

Her son Gareth (21), who has cerebral palsy, has an adapted bedroom downstairs. As the floods came in, she had to bring his bedding, furniture and computer upstairs also.

“My son asked his friends to help and they landed in force. They did a great job ... we were able to get the important things moved,” she said.

“It’s total devastation. Everything is a mess.”

This is not the first time homes at Clarendon Drive were flooded. Three years ago this area, which lies beside the River Eske, was flooded.

“It’s so disheartening to see everything in your house touched by water. It’s very hard to think about tomorrow or the next day. When the tide returns tonight or another storm comes what are we going to do?

“We have young families, pensioners and people living on their own here,” Ms Culloo explained.

Since the first floods, she has been unable to get insurance. “All the damage will have to come out of our own pockets,” she said.

The water had receded by midday Friday, but Ms Culloo said the worry will be constant for any future storms this winter.

“The water is away but the river is still flooded and the tide is high. It’s not a nice feeling wondering will it happen again.”

Six to eight inches of water

Nearby at the local printing and gift store on New Row, the clean-up had begun. Laurence McHugh from New Row Signs and Graphics made preparations for the storm but he didn’t expect conditions to be so bad.

“We had about six to eight inches of water this morning. It went through all the floors and some stock,” he said.

“Everything had to be lifted and taken away, we had to take out the floors and it’s all in the skip now to be dumped.”

Adjacent to the printing store is April Soames hamper and gift shop Hakuna Matata. Her business started just six months ago, but it’s back to the drawing board after the storm damage.

Kevin ‘Boxer’ Moran, Minister of State for the Office of Public Works (OPW) and Flood Relief, has been strongly criticised in the wake of the flooding which struck Donegal town.

“Three years ago we took Kevin Boxer Moran down here, he shook our hands and he told us that he was going to solve this problem. Here we are again with flooded homes,” he said.

“Families can’t get insurance against floods anymore. They are devastated.”

Donegal Co Council said one house and four businesses were affected by flooding on New Row, as well as five homes in Brookfield and up to eight homes at Clarendon Drive. A green area at St John Bosco Centre at Drumrooske in Donegal town was also flooded.

“Donegal County Council’s housing service is currently engaging with households displaced by this flooding event with a view to providing housing assistance and support where needed.”