Branches of folklore: the Irish oak, ash, yew and birch

Prior to modern green thinking, mythology surrounded the identity of ancient Irish trees 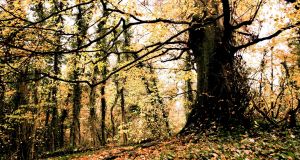 Autumn oak in Donadea, Co Kildare: Our fascination with trees is not just because they are objects of beauty but because they are “living beings that breathe and grow and struggle to survive and recreate just as we do ourselves”.

Our appreciation of trees seems to peak in the autumn months as we witness the splendorous colour of leaves falling from broadleaf trees. The importance of trees for shelter, food and clean air as well as for their aesthetic and amenity value is prominent in global debates about natural solutions to climate change and urban spaces for pedestrians and cyclists.

But trees have always been a part of human consciousness, and our connection to trees was celebrated in mythology and folklore long before their scientific and environmental values were proven.

In ancient Ireland and across Europe, mythology and folklore were an integral part of the knowledge surrounding each tree, according to Niall Mac Coitir, the author of Irish Trees – Myths, Legends & Folklore (Gill Books). And, there was not a split – as there is now – between folklore and natural history.

He says that our fascination with trees is not just because they are objects of beauty but also because they are “living beings that breathe and grow and struggle to survive and recreate just as we do ourselves”.

The role of trees as markers of important places (eg royal sites or holy wells), how trees were seen to be a source of magical powers and the folk customs associated with them are just some of the topics Mac Coitir covers in his book. And, he explains how the letters in the ogham alphabet – which was the first form of writing ever used in the Irish language – are named after trees.

“One of the things which surprised me most in my research was the strong emphasis on how trees were used to protect the livelihood of farmers and particularly to protect their cattle and dairy products,” says Mac Ciotir. For example, twigs of mountain ash were placed around milk churns or on the tails of cows to protect the milk from the fairies.

The significance of trees in people’s lives can also be seen by the number of place names across the country derived from trees. Charles Nelson in his book, Trees of Ireland, recorded over 1,600 townlands in Ireland containing the word “doire” or oakwood which reflected how widespread oak forests once were.

The oak was a very important tree to the Celts and several well-know Christian sites are associated with oak groves. For example, Derry city, in Irish is Doire Cholmcille, Colmcille’s oakwood. Kildare – Cill Dara – is church of the oak. “The oak is a symbol of kingship because of its connotations of strength and fertility,” writes Mac Coitir. The word for oak in both Irish and Welsh means a chief and oak trees were often found near ancient royal sites across Ireland.

Beith, the Irish word for birch is found in the Kerry town of Glenbeigh – Gleann Beithe, or glen of the birch – and the Dublin suburb of Terenure is derived from Tir an Iuir, or land of the yew.

Birch trees featured strongly as a symbol of love in Celtic times, according to Mac Ciotir. And birch branches were put over cradles to protect babies in the Scottish Hebrides. With its shiny white bark, birch also featured in many summertime festivals.

Mature ash trees were thought to be a symbol of the wellbeing of the land itself. Noted for their strong and flexible timber and the delicacy of their leaves, ash trees also had associations with healing and fertility through their symbolic link with water and wells. In the Scottish Highlands, newborn babies were fed the sap that oozed out the end of a burning green stick of ash. Yet, folk traditions in Ireland and England claim that the ash tree is the first tree to be struck by lightning.

Some ancient beliefs about the powers of certain trees have since been proven scientifically. For example, the blossoms of hawthorn trees were considered to be unlucky, and it has since been discovered that a chemical present in the early stages of human tissue decay is found in hawthorn bushes.

People often debate which trees are native to Ireland and which are not, but Donal Magner in his book, Stopping by Woods: A Guide to the Forests and Woodlands of Ireland (Lilliput Press) states clearly that oak, ash, elm, birch, alder, Scot’s pine and yew are regarded as native because they were in Ireland before the submersion of the land bridge between Ireland and Britain.

According to Magner, species introduced by humans at a later date are regarded as non-native trees. These include beech, sycamore and sweet chestnut – even though these trees have become naturalised and have been in Ireland for centuries.

The seventh-century Brehon Law texts divided trees and shrubs into four classes, depending on their timber, edible fruit and nuts, spiritual or medicinal properties. In this system, trees were classified as either nobles (oak, hazel, holly, yew, ash, pine and apple), commoners (alder, willow, hawthorn, rowan, birch, elm and cherry), lower divisions of the wood (blackthorn, elder, spindle, whitebeam, arbutus, aspen and juniper) or bushes of the wood (bracken, bog myrtle, gorse, bramble, heather, broom and wild rose). So-called Laws of the Neighbourhood governed their uses with fines for damaging or cutting trees without the landowner’s permission.

One could argue that the contemporary version of “laws of the neighbourhood” has been seen around Dublin this year as communities protested about the removal of cherished trees from certain roads due to be widened for bus corridors.

Niall Mac Coitir says that one issue with street trees is that the wrong kind of tree was often planted which damaged footpaths. “The key thing is if any tree is taken out, that another one is planted to replace it – if not in the same spot then in a nearby open space,” says Mac Coitir who also encourages people to plant trees in their gardens. “Even if you’ve only space for a small tree, it makes such a difference to wildlife, and trees with edible fruit can also be a food source,” he adds.