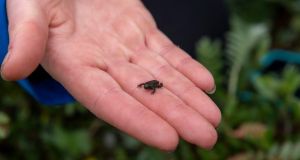 Hundreds of the country’s rarest toads - measuring only half an inch have been released into specially constructed ponds in west Kerry. Photograph: Domnick Walsh

Over 1,000 natterjack “toadlets”, Ireland’s only native toad, have been released into specially constructed ponds in west Kerry after being rescued and reared in captivity during the dry spell, the National Parks and Wildlife Service (NPWS) has confirmed.

They had to be rescued earlier this year after the long period of dry weather dried up their ponds.

Some 463 tadpoles were rescued by NPWS staff and brought to the Dingle aquarium where they were reared. A further 600 were reared in Fota Wildlife Park in Cork as part of a captive toadlet breeding programme there.

The natterjack, an internationally endangered species, is found in Ireland only in southwest Kerry, primarily in the Maharees and Castlegregory areas where a golf course and sand dune system are some of its most important breeding grounds.

The decline in farmland ponds has been identified as the main cause of natterjack toad decline across Europe.

A pond construction scheme put in place by the NPWS in 2008 involving local farmers has seen around 100 ponds dug. Farmers are asked to maintain around the ponds under five-year contracts for which they are paid €1,000 a year.

“We are trying to recreate the original range around Castlemaine Harbour,” said Dr Ferdia Marnell, amphibian expert with the NPWS, who heads up the programme put in place by field workers.

Although one in five of the constructed ponds have become colonised, numbers of toads are still in decline, according to the most recent survey and the toad is on Ireland’s red data list of endangered species.

Unlike the common toad, the natterjack crawls and runs rather than hops, burrow into sand dunes and have a distinctive yellow stripe down their back,according to ecologists with the NPWS.