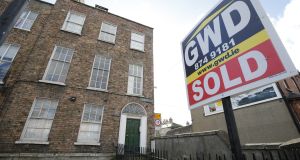 Sabina Higgins is rallying support for the former home of playwright Sean O’Casey to be turned into a “cultural arts centre”.

In a letter to academics, local politicians, trade unionists and artists, the wife of President Michael D Higgins said funding should be sought from Minister for Finance Paschal Donohoe and Minister for Culture Catherine Martin, and a motion put before Dublin City Council, to ensure the house is “safeguarded for development as a cultural hub”.

The council is buying O’Casey’s last Dublin home, 422 North Circular Road, but plans to use it for homeless accommodation.

In the letter to writer Roddy Doyle, theatre director Fiach Mac Conghail, historians Catriona Crowe and Christopher Murray, as well as several city councillors, Mrs Higgins, an actor, said she hoped the house would not have to be “bought off the city council” so it could be retained for cultural use.

The recipients of the letter are part of a group that has expressed an interest in the cultural hub project.

However, in recent weeks the council’s head of housing, Brendan Kenny, said funding had now been secured, and the council would buy the building. The purchase and refurbishment was expected to cost more than €1.6 million and the house would “not be a museum”, he said.

“It is being bought for homeless accommodation. But I would have no difficulty with it being called Sean O’Casey House.”

At the weekend Mr Kenny confirmed that this remained the position.

O’Casey moved into the house in the early 1920s, and in a ground-floor room wrote his Dublin trilogy: The Shadow of a Gunman, Juno and the Paycock, and The Plough and the Stars. His fellow tenants provided inspiration for several of his characters, including Mollser Gogan, and Captain and Juno Boyle.

In her letter Mrs Higgins wrote that in June the group had decided to raise funds to buy the house through a “major fundraising drive aimed at the public, targeting philanthropic and academic and other sympathetic institutions, both in Ireland and abroad” as it knew “there was an appreciation of the national and international significance of Sean O’Casey’s work and the three plays in particular written in 422 North Circular Road”.

However, Mrs Higgins said that now the council was buying the house, the group needed to make representations to city councillors so a motion could be adopted to ensure it was “safeguarded for development as a cultural hub” and secure Government funding. The expert advisory group on centenary commemorations should also be approached, she added.