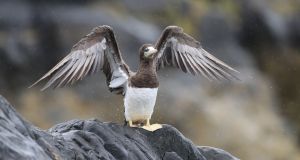 A picture what is believed to be the first ever sighting of a brown booby in Ireland, in Greystones on Tuesday. The large seabird is usually found fishing in tropical waters in the Gulf of Mexico and the Caribbean. Photograph: Nick Bradshaw/The Irish Times

Dry spells and some sunshine look set to be on the cards for Ireland for the next 40 days, if the legend of St Swithin is anything to go by.

Today, July 15th, is St Swithin’s Day and if the myth of the holy man holds true then whatever weather we see today is likely to be replicated every day for the next 40 days and 40 nights.

St Swithin was the bishop of Winchester and died in 862AD. He was canonised more than a century after his passing and his remains were exhumed and moved from a humble plot in the graveyard to a shrine in the adjoining cathedral.

However, apparently Swithin was a settled soul and did not take kindly to being moved.

In fact he was so furious with the decision - taken by his successor Bishop Ethelwold - to move him to a fancy shrine in a big cathedral that he put a weather related curse on the whole world.

On the day his body was moved and as the ceremony to celebrate his saintliness reached its end, it lashed rain.

So great was the storm that locals believed it could only have been caused by the saint’s furious anger at Ethelwold’s decision to go against his wishes and move him to the big shrine.

Met Eireann has said it will be mostly cloudy and rather misty on Wednesday morning with patchy drizzle, chiefly affecting the north and east of the country.

However, long dry spells will develop as the day progresses, especially across the south and southeast of the country with warm sunny spells.

Highest temperatures will be between 16 and 19 degrees but reaching 20 to 21 degrees in any sunshine in moderate west or northwest breezes.

Thursday will also start mostly cloudy and misty with patchy drizzle. The cloud will break in some areas during the afternoon, especially across the east and south of the country allowing for some warm sunshine to develop.

However, it looks set to remain rather cloudy along the Atlantic seaboard with further patchy light rain or drizzle. Highest temperatures will be between 16 and 20 degrees.

Friday will be another mostly cloudy day across west Munster, Connacht and west Ulster with rain at times and highest temperatures of 16 to 18 degrees.

Elsewhere, it will be mostly dry with a mix of cloud and bright spells with highest temperatures of 19 to 22 degrees.