Dundrum to bring in one-way system to allow greater distancing 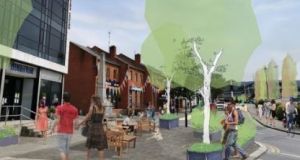 A visualisation of the plans for Dundrum village. Image: Dún Laoghaire-Rathdown County Council

A one-way traffic system to allow more space for cyclists and pedestrians is to be introduced in Dundrum village in south Dublin.

The space freed up from the removal of one traffic lane will allow for the widening of footpaths for pedestrians and a new contra-flow cycling lane. The works will begin at the end of this month and take five weeks to complete, Dún Laoghaire-Rathdown County Council has announced.

The changes are to be temporary to allow for better social distancing on footpaths during the coronavirus pandemic, and to open up more on-street space for businesses to put out tables and chairs.

The one-way traffic lane will run from Sandyford Road northwards onto Main Street, as far as the entrance to the Lidl car park.

The local authority said on-street parking would be “repositioned” from the east to the west side of Main Street, retaining the “majority” of parking spots.

“There is no net loss of car parking, with a better distribution through the village,” the council said. The council also intends to add flower planters, seating, and additional bicycle parking to the street.

Peter O’Brien, Labour Party councillor for Dundrum, said the plans would give the village main street a “facelift” following years of neglect.

Several shop fronts on the street were boarded up, with businesses in the area suffering from a lack of footfall, he said.

There were a few people who were “cautious” over the plans, with some concern over bus routes being diverted, he noted. “It’s very ambitious,” he added. “There will be some issues to iron out.”

Green Party councillor Una Power, mayor of Dún Laoghaire-Rathdown, said Ireland had seen a “bike boom” during the pandemic and the changes would facilitate more families cycling into the village.

“This is something that we needed to do as a council – to reopen our villages and towns in a time of Covid,” she said.

Darren Chambers, manager of Lisney estate agents on Dundrum main street, said overall the proposed changes appeared to be positive. “The majority of people that I speak to welcome it,” he said.

Mr Chambers, who is also chairman of Ballinteer St Johns GAA club, said providing safe spaces for people and families to cycle into the village was welcome.

However, he noted there were concerns from some businesses over the impact of the removal of parking on their trade. “I do have massive respect for my neighbours in business, who feel it is something they did not get to contribute their opinion on,” he said.

Frank Mulvey, of Mulvey’s Pharmacy, is staunchly opposed to the changes, saying there had been “absolutely no” consultation with local businesses.

The one-way system would make it harder for elderly people to travel into the village centre, he said. “I’m not someone who objects to everything, but this has to affect our business.”

The changes are similar to a new one-way traffic system introduced in Blackrock village, also to allow for extra space for cyclists and pedestrians.