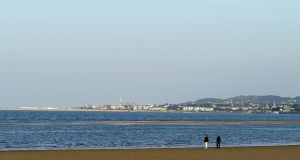 Merrion Strand: its problems are said to be largely due to polluted streams ‘discharging’ on to the beach.

Swimming is set to be permanently banned at Merrion Strand in Dublin due to ongoing poor water quality results, according to Dublin City Council.

The south Dublin beach failed to meet minimum EU bathing water standards for four years in a row up to and including 2018.

If it fails to meet the minimum standards for a fifth consecutive year, a “permanent prohibition” on bathing will be put in place. It would be the first Irish beach to have such a prohibition.

While the Environmental Protection Agency (EPA) will not issue the results of its 2019 bathing water quality tests until April or May, the council has said there is a “high risk” Merrion Stand will again fail to make the grade.

Although beaches in Dublin Bay, including Merrion Strand, were closed several times last year due to sewage overflow at the Ringsend treatment plant, the council said the problems at Merrion Strand were largely due to polluted streams “discharging” on to the beach.

The streams, the Elm Park and Trimlestown streams, originate in the Dún Laoghaire-Rathdown area and both councils have established a task force to work on the problem.

Green Party councillor Donna Cooney said it was likely to be several years before the issues affecting Merrion Strand were resolved. The poor quality of the water was particularly disappointing given the increasing popularity of year-round sea swimming, she said.

Meanwhile, a survey by Coastwatch Ireland shows litter caused by drinks containers like plastic bottles and aluminium cans has fallen dramatically around the Irish coastline.

The annual survey of 541 coastal locations conducted last autumn shows a halving of such items found, compared to 2018. This is the most positive trend achieved in 31 years of surveying conducted by volunteers of 500m-long coastal areas, according to Coastwatch director Karin Dubsky.