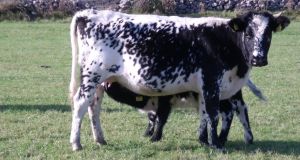 An endangered breed of cow has been recognised as a native rare Irish breed in a move that is expected to bolster its numbers.

The Droimeann cow, recognisable by a white streak along its backbone, has been recorded in historical documents for many years, according to Minister for Agriculture Michael Creed.

With just 243 breeding females and 23 breeding males, the breed is considered to be at risk. Its designation as a native breed follows extensive DNA profiling that showed its bovine type was distinct from that of other breeds.

Mr Creed approved the new recognition of the breed on Wednesday. “There are many factors such as cultural, historic, and genetic diversity that make the Droimeann a breed with a rich history unique to Ireland. They have an adaptability that has allowed them to thrive in Irish production conditions. There are historical references to the breed for many years, and thanks to a lot of work by many people and the advent of modern genotyping techniques, we have finally been able to prove their uniqueness as a breed,” Mr Creed said.

The last animal to be designated a rare Irish breed was the Kerry Bog Pony, 15 years ago. The list of breeds recognised as being native and rare now includes Kerry, Dexter, Irish Maol and Droimeann cattle; Connemara ponies; and Irish draught and Galway sheep.