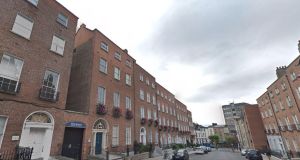 Two cultural and heritage organisations have become involved in a planning row over plans to convert a building in Dublin’s north inner city into a co-living scheme for more than 130 people.

The James Joyce Cultural Centre and the Irish Georgian Society are among a number of parties which have appealed the recent decision of Dublin City Council to grant planning permission for the demolition of an existing warehouse between North Great George’s Street and Hill Street to facilitate the construction of a shared accommodation facility.

It will provide 132 bedspaces, 105 of which are designed for a single person.

An Bord Pleanála has been asked to adjudicate on the project proposed by Hill Street Limited Partnership for the seven-storey development, which will include a laundry, gym, co-working spaces as well a communal lounges, a publicly accessible cafe, courtyard and roof terrace.

Communal kitchens and living spaces will be provided on the majority of floors.

The proposed development is located close to the Bakery development at the junction of Gardiner Street and Parnell Street, which is due to provide more than 250 student bedspaces.

The promoters of the scheme said there was a growing popularity for the shared accommodation model which was “driven by shifting consumer preferences with an increased appreciation of experience versus ownership as well as by a growing sense of loneliness and disconnection among young people that co-living helps address”.

They claimed interest in co-living had been demonstrated by an “explosion” in internet searches about such accommodation over the past five years.

However, the James Joyce Cultural Centre, which is located on North Great George’s Street, said it was concerned the project represented an intense redevelopment of a site that could “have a negative impact on the built heritage of the area”.

The centre said it was a key cultural amenity, as well as a building of architectural significance and a visitor attraction in the heart of the north inner city and the impact on its operations had to be considered.

It claimed the proposed development had the potential for significant overbearing and overshadowing of the cultural centre.

While the main entrance to the shared accommodation scheme is via Hill Street, the centre said a proposed pedestrian entrance at the side of its building on North Great George’s Street would create noise and security issues.

It also raised concerns about the removal of a boundary wall, which it claimed could affect the structural stability of the visitor centre.

While the Irish Georgian Society acknowledged that the site of the proposed development could be enhanced by a sensitively designed project, it has objected to the height and scale of the proposed shared accommodation facility because of its impact on the character and setting of protected structures on North Great George’s Street which is located in a conservation area.

A ruling on the case is due by the end of April.