‘The turnaround is massive. We think it’s happening because of behavioural change’ 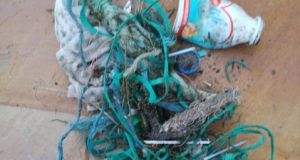 Coastal litter caused by drinks containers like plastic bottles and aluminium cans has fallen dramatically around the Irish coastline, according to Coastwatch Ireland.

The results of its annual survey of 541 coastal locations conducted last autumn show a halving of such items found, compared to 2018.

This is the most positive trend achieved in 31 years of surveying conducted by volunteers of 500m-long coastal areas, according to Coastwatch director Karin Dubsky.

“The turnaround is absolutely massive. We think it’s probably happening because of behavioural change mainly; more and more people are aware of how drinks containers are polluting the landscape, especially our coastlines,” said Ms Dubsky.

“More people carry multiuse containers and are careful not to litter,” she said. Other factors include a higher clean-up frequency on many shores, especially urban ones, and that there was no storm or flooding during the survey period.

If increased clean-ups by groups taking away litter from the coastline was the main contributory factor, this would have been reflected in reduced amounts across all litter categories. But this was not the case, with increased polystyrene and wet wipes standing out in the latest figures, noted Ms Dubsky.

What about wet wipes?

The increased presence of wet wipes was worrying, she said – one or more of which was found in 12.2 per cent of locations. Frequently they were found to be linked to raw sewage discharges nearby.

Ms Dubsky said the level of wet wipes in such locations was likely to be higher “as they are not easy to identify if mixed up in seaweed”.

The 2019 survey found 701 plastic shopping bags (35.5 per cent of locations), while the biggest increase was in “other items”. These include single-use cups, picked out in 6 per cent of survey units. Cotton bud plastic sticks were found in 5 per cent of places, followed closely by cigarette butts and wrappers, balloons, golf balls, farm plastic and “full dog pooh bags”.

Abandoned vehicles, girders and machines or large machine parts were noted on 9.2 per cent of shores. In some cases this and the occurrence of landfill materials are linked to coastal erosion.

Tyres were found on 19 per cent of shores (totalling 876 tyres). This is “strongly related to areas where tyre traps are placed to catch peeler crabs, especially in counties Wexford, Waterford and Cork”.

Shipwrecks were observed in 4 per cent of survey units “and may include historic boats which are now part of heritage and not really well recorded under the waste heading”.