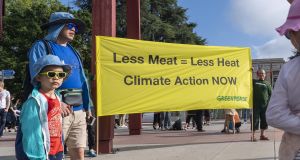 Greenpeace activists hold a banner in front of the UN before a news conference on the Special Report on Climate Change and Land in Geneva, Switzerland. Photograph08 August 2019. Photograph: EPA

Eating less meat and reducing food waste is an effective method to reduce global warming, according to the UN.

In the latest report from the Intergovernmental Panel on Climate Change (IPCC), it predicts that taking this course will save millions of square miles of land from being degraded by farming.

Currently, a quarter of the world’s ice-free land has been damaged by human activity, with soil eroding from agricultural fields up to 100 times faster than it forms, the world’s leading climate scientists warn.

While the report advocates switching to a plant-based diet to reduce greenhouse gas emissions, and strongly supports eating less meat and dairy products, it does not recommend limits on consumption and stops short of explicitly calling on everyone to become vegan or vegetarian.

Measures on incorporating more vegetables and non-meat sources in diets is a matter for governments and individuals, the IPCC acknowledges.

The report, approved in Geneva by the world’s governments, makes clear that humanity faces a stark choice. Continued destruction of forests and huge emissions from cattle and other intensive farming practices will intensify the climate crisis, making the impacts on land still worse, it warns.

A major shift to vegetarian diets around the world is necessary to keep global heating under 2 degrees above pre-industrial levels, it concludes.

Consumers in rich countries could act immediately by reducing their consumption of intensively-produced meat and dairy foods – products proven to have a huge environmental impact, it adds.

“There is much more we could do in that space that we are not doing, partly because it is difficult,” said Pete Smith, a professor at the University of Aberdeen and a senior IPCC author. “You wouldn’t want to tell people what to eat, that would go down badly. But you could incentivise.”

The IPCC report suggests “factoring environmental costs into food”. Previous studies have suggested meat taxes, or subsidised fruit and vegetables. Meat production ties up most farmland and cutting consumption could release millions of square kilometres for forestry or bioenergy crops, the report says, as could cutting food waste.

Caterina Brandmayr of the Green Alliance thinktank, said: “The key message from the IPCC is urgency: we need to act now to plant new forests, restore our ecosystems, and, yes, to eat less meat.”

Cutting the amount of meat and dairy products eaten in wealthy nations is a “major opportunity”, the IPPC report says, due to the heavy environmental impact of intensively reared cattle. Drastically reducing food waste – 25 to 30 per cent of all food is never eaten – must also be a key priority.

When the transition to a low-meat diet reduces the agricultural area required, land is abandoned and the re-growing vegetation can take up carbon until a new equilibrium is reached. This is known as “the land-sparing effect”.

“Some dietary choices require more land and water, and cause more emissions of heat-trapping gases than others,” said Debra Roberts, co-chair of the IPCC Working Group II.

Next in the rankings was the “fair and frugal” diet (limited animal source food, rich in calories); the pescatarian diet (seafood), the climate carnivore diet (limited ruminant meat and dairy) and the Mediterranean diet (moderate meat, rich in vegetables).

Separately, the IPCC says humans will also need to significantly change how food is produced and consumed to ensure production is more sustainable and consumption leaves a lower carbon footprint.

Panmao Zhai, one of the authors, commented: “There is real potential here through more sustainable land use, reducing over-consumption and waste of food, eliminating the clearing and burning of forests, preventing over-harvesting of fuelwood, and reducing greenhouse gas emissions (to help) address land-related climate change issues.”

Leo Varadkar and Micheál Martin agree to exploratory talks 11:36
Cash, car, laptops and documents seized in Louth CAB search 10:45
Some 1,500 staff in healthcare bodies on strike over pay restoration 10:15
Britain phases out sale of coal and wet wood for burning at home 09:45
Woman released after arrest over alleged threats to rape victim 09:23