Reclaiming Dublin Bay land for homes ‘not without merit’ 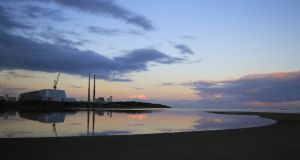 Reclaiming Dublin Bay for housing would be preferable to “using it as an open sewer” Independent Cllr Mannix Flynn has said.

Cllr Flynn was responding to a suggestion by Royal Institute of the Architects of Ireland president David Browne that building on Sandymount Strand and the Tolka Estuary could provide enough homes for 150,000 people.

Cllr Flynn said reclaiming lands in Dublin Bay for housing “was not without merit”, but he doubted the plan would proceed.

There would be clear environmental issues in reclaiming Dublin Bay because it is a Unesco biosphere, said Cllr Flynn. But the “deplorable discharge of sewage” into the bay is a bigger environmental concern he added. “It would be more appropriate and more respectful of Dublin Bay to use it for housing than simply using it as an open sewer.”

“I have to say it’s a bizarre suggestion, but it’s not the first bizarre plan for Sandymount. In the 1930s it was suggested it would make a good location for an airport,” said Cllr McCartan.

In 1935 architect and engineer Desmond McAteer proposed reclaiming the strand for an “aerodrome”, and for housing, citing its proximity to the rail line and the city centre as advantages. But the following year a north Dublin site was chosen for the airport.

Land had previously been reclaimed in Dublin Bay for housing, said Cllr MCartan.“What we would think of the ‘new houses’ in Irishtown, the houses built on the Sean Moore Road 30 years ago, so it has happened before. But not to the scale that’s being suggested here.”

It would he joked, “at least restrict views of the incinerator from Sandymount”.

Labour Cllr Dermot Lacey said Dublin Bay could be “destroyed” by building housing on it.

“Dublin Bay is an asset that we have destroyed enough of, I don’t see any advantage in destroying it any more,” he said.“The biggest problem is not the quantity of land [but] how we are using it. The plans for the glass bottle site represent a good use of land . . . I don’t think the same can be said for this plan.”

However Cllr Lacey said he would welcome a detailed presentation from Mr Browne.

“I would welcome him coming in to talk to us, perhaps he could make a presentation to the planning committee. He is at least thinking about solutions to the housing crisis and he should not be criticised for that. But I don’t see this as being the solution.”

“We are in the middle of a housing crisis but thinking we can solve it by filling in Dublin bay, a Unesco biosphere, would be shooting ourselves in the foot. The idea of the biosphere is of people finding common ground with nature, not of pushing nature further out.”

The Netherlands, which had been the world leader in reclaiming land for development, had “really scaled back on reclamation because of he enormous loss of biodiversity” he said. “I agree that we need to achieve higher densities but filling in Dublin Bay is not the answer.”