Land use must shift from beef to forestry 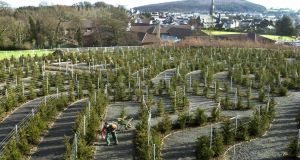 Perhaps the reluctance of more farmers to consider forestry is understandable from a behavioural and social perspective as beef farming is a familiar way of life for many landholders. Photograph: Matt Kavanagh

The recently published annual review from the Climate Change Advisory Council recommended that a reduction in the national cow herd would deliver a significant decline in national greenhouse gas emissions and that many aspects of the low-carbon transition objective are contingent on an expanded and sustainable forestry sector.

There is currently a large area of land in cattle production which would earn more money under forestry. Recent farm income data from Teagasc shows there are extremely low or negative profit margins being made from beef farming while the forestry premium for coniferous species now greatly exceeds the average returns in beef farming while it is greater still for broadleaves.

It is important to stress that the replacement of beef farming with forestry is a win-win-win action. It increases farm income, reduces emissions and significantly increases carbon sequestration. And yet in all the recent controversy about low returns from beef farming or the threat posed by the proposed Mercusor deal, these facts never got a mention.

Generally there has been a marked reluctance on the part of the landowners to heed the financial imperative. Perhaps the reluctance of more farmers to consider forestry is understandable from a behavioural and social perspective as beef farming is a familiar way of life for many landholders who would not be knowledgeable about forestry. There is also a very prevalent negative attitude to forestry ranging from such perceptions that forestry is inimical to agricultural development to it being responsible for rural depopulation and social isolation and limiting land-use options.

In general, it could be said that State policy over the years, with respect to afforestation, has been inconsistent in its budgetary provision and declining in achievement, even as its role in emissions mitigation should have been become more obvious.

The forestry programme for the period 2015-2020 had a planting target of more than 43,000 hectares and it is particularly disturbing that even that low target will not now be achieved.

Consequently, consideration must now focus on the shape and structure of the forestry programme in the period 2021-2027. As afforestation is the most significant mitigation option available to Ireland’s land-use sector, it had been the Government’s intention to increase annual afforestation to 15,000 hectares with a target of expanding forest cover from the current 11 per cent of the land area of the country to 18 per cent by 2046.

However, in the Climate Action Plan, the target is to increase afforestation rates from their current levels to an average of 8,000 hectares per year, in order to reach a forestry land-cover target of 18 per cent by the second half of this century. However this clearly does not add up, as it would take almost double that rate of planting to realise that land-cover target.

So what then are the prospects for realising a scaled-down but environmentally focused forestry target and under what circumstances might it achieved?

The rate of afforestation depends not only on the incentives available but also on such factors as awareness levels, promotion activities and technical support systems. However, the actions in the climate plan to support land diversification, while relevant, may not be ambitious enough. To achieve the greatest possible level of planting, it would seem imperative to give serious consideration to many factors.

At a policy level, it is necessary to adopt an integrated approach in designing land-use schemes including forestry so as to achieve compatibility and complementarity between the respective measures. The promotion of forestry probably needs to be more strongly developed and its role in climate change and rural development given greater emphasis. The development of knowledge transfer groups representative of the relevant stakeholders or perhaps some form of European innovation partnerships could play a useful role in effecting attitudinal change towards forestry, while every effort must be made to reach out to those particular landholders who are the most likely target category for forestry but who are the least likely to have contact with the farm support services.

Finally, it could be an opportune time to establish a national forum of the respective interests such as existed in the mid-1990s to identify the factors impeding or likely to impede the more rapid adoption of farm forestry and how these might be addressed.

1 Why you still can’t have a European holiday this summer. Or can you?
2 Donald Trump’s political success is based on racism
3 The night shift: ‘In 38 years, I’d never seen an owl in the city centre’
4 Oliver Callan: ‘I was a perfect candidate for exploitation’
5 David McWilliams: We won't have another 1980s-style recession
Real news has value SUBSCRIBE