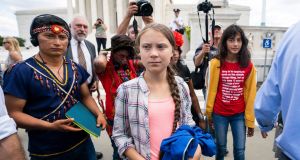 More than 800 rallies are due to take place across the 50 states of the US on Friday as pressure mounts on Donald Trump’s administration to change policy on climate breakdown.

The protests will focus primarily on the US itself, as it has walked away from the Paris Agreement and continues to be second-biggest carbon emitter globally, while its president, Mr Trump, has consistently rowed back on climate commitments put in place by previous administrations and openly supported fossil fuel industry expansion.

The biggest march will be in New York and led by the Swedish teenager Greta Thunberg. Former president Mary Robinson, a strong advocate of more urgent global climate action, is due to attend the event in solidarity with the young strikers.

A number of young climate ambassadors from Ireland, who are due to attend a youth summit hosted by the UN on Saturday, will also be at the demonstration in Foley Square, marching to Battery Park near the World Trade Centre.

Public school students, totalling 1.1 million pupils, have been given permission to skip classes without penalties to join climate strikes. The decision last week by the largest school district in the US buoyed national protest organisers, who are hoping the demonstrations will be the largest on climate in the country’s history.

“Holy smokes, this thing could get HUGE,” Jamie Henn, a founder of the climate action organisation 350.org, posted on Twitter after the decision was announced by New York’s Department of Education.

Critics – ranging from climate-change deniers to people who argue for a less radical approach to fighting the problem – said mayor Bill de Blasio was using school attendance policy to promote a political aim. The New York Post called the decision “out-and-out government sponsorship of a particular point of view.”

Young people have been mimicking the actions of their peers in Europe by protesting on Fridays outside the UN headquarters in the city. Thunberg, in spite of in effect driving climate activism in Europe for the past year, was relatively unknown in the US until she arrived in New York on a yacht, powered by renewable energy, a few weeks ago.

All that has changed after she attended numerous events and appeared on many TV and radio shows – at some gatherings, she has attempted to adopt a low profile, seeking to defer to her American peers.

It culminated this week in a high-profile submission to the US Congress, in an exchange lasting barely over a minute.

Thunberg and the Fridays for Future movement of schoolchildren were awarded Amnesty International’s Ambassador of Conscience Award for 2019 at an awards ceremony in Washington.

In a short film released on Thursday, she joined activist-writer George Monbiot of the Guardian to emphasise the role protecting and restoring living ecosystems such as forests, mangroves and seagrass meadows can play in repairing the planet’s broken climate.

Natural climate solutions could remove huge amounts of carbon dioxide from the atmosphere as plants grow. But these methods receive only 2 per cent of funding spent on cutting emissions, the climate activists add.

Their call to protect, restore and fund natural climate solutions comes ahead of a UN climate action summit of world leaders in New York on Monday. The film will be shown to heads of state and the UN’s climate and biodiversity chiefs.