When mushroom picking, a little knowledge is a dangerous thing 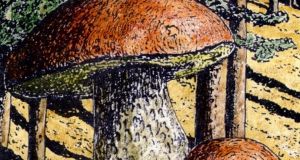 As if in further assertion of personality, our solitary beech tree has suddenly offered its first mycorrhizal mushrooms – three different kinds, crowded in an arc at the edge of its dark pool of shade. Most are clusters of small and dainty, frilly edged fruit in a glowing terracotta. They are, I judge, a poor cousin of the golden and delicious chanterelles that the roots of beeches so often host and quite without their promising apricot fragrance.

How much of one’s caution is cultural? Many, if not most, of the mushroom hunters abroad at dawn with their baskets in Irish woods this autumn will, I guess, not be Irish at all, but eastern European settlers, marvelling at this oddly neglected harvest.

An article on the Polish website culture.pl discusses the “mycophilic” nature of the Poles and their eastern neighbours “in stark opposition to ‘mycophobic’ countries such as Great Britain, the United States, Belgium and Denmark ... Looking at the folkloristic English names of many wild mushrooms, we can feel their anxiety. Witch’s Hat, Destroying Angel, Poison Pie, Witches’ Butter, Devil’s Urn or Dead Man’s Fingers ... ”

The sentiment rings true enough for Ireland, if not the exact terminology, and one presumes – indeed hopes – there are also some fairly dark folk names for identical fungi in Poland.

Mushroom-picking there is booming. “Not only the rural population does it, but also city folk, scholars and even modern hipsters”, all drawn to “this primal, utterly non-modern and even potentially dangerous activity”. Even in buses outside Warsaw in the morning, we’re told, “one smells mushrooms”.

Thrill of the search

Part of the enthusiasm comes from the place of forest mushrooms in Polish cuisine, in soups and hunters’ stews, pickled or fermented, or filling little dumplings in a Christmas beetroot borscht. But more has to do with the thrill of the search in an unaccustomed, atmospheric natural world.

Poland’s food markets in autumn are piled with ceps, boletus, chanterelles, and saffron milk caps, and an official list regulates the species to be sold. “There’s no such list in Britain,” the website comments, “since nobody there picks mushrooms anyway.”

There’s no such list in Ireland, either, but the burgeoning appetite for more exotic wild mushrooms from the forest, nurtured by magazine recipes and adventurous dining out, has been positively encouraged by officially sponsored advice.

This has been channelled through Coford, the National Council for Forest Research and Development. Addressing Ireland’s “lack of a foraging tradition” in 2008, it published a robust ring-bound hardback, Forest Fungi in Ireland (€30), by Paul Dowding and Louis Smith (order from orla.cashen@agriculture.gov.ie).

The authors have eaten all of the 43 edible species found in Ireland. But they give close attention also to 14 species best avoided and another 13 (the Destroying Angel and its deadly cohort) whose fatal toxins have no proven antidote.

Along with publishing this very good book, illustrated with photographs from Ireland, Coford carried out three years of annual surveys, up to 2009, to assess the edible mushrooms growing in Irish woods. The idea was to explore the substitution of native species for at least part of the €800,000 worth of frozen wild mushrooms imported to Ireland each year, mostly for hotels and restaurants.

In more than 50 forests across the country, with stands of different conifers and hardwoods, the stubbly hedgehog mushrooms and varied chanterelles were the most abundant edible types and broadleaf woods the most productive.

Given the spread and diversity of forest ownership in Ireland, one still waits to see where all this might lead. The woods across the mountain, where I once got off the bike to gather ceps, chanterelles and hedgehogs, are now jealously fenced off. And from its once-generous encouragement of a national harvesting of wild forest fungi, Coford promotes the growth of exotics such as shiitake and oyster mushrooms on piles of inoculated logs in “farm forests”.

The vivid mycorrhizal display beneath our beech suggests a productive year for native fungi, both above and below ground, producing the giant puffballs photographed by readers for Eye on Nature. And yes, you can eat puffballs at any size, while they are still whitely sliceable all the way through – a good way of enjoying illicit and crispy bacon fat.