Friday’s climate protests in Ireland: When and where they’re on 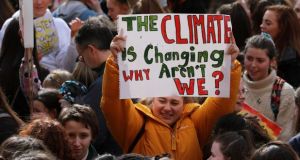 Ten large rallies are being held across Ireland on Friday, the biggest in Dublin, as part of the global day of action to counter climate disruption.

Student organisers and campaigners supporting the School Strikes for Climate movement hope the Irish protests will be unprecedented in scale.

In the capital, protesters will gather at noon at Custom House Quay, leaving half an hour later on a march to Merrion Square, arriving at 1pm.

In Cork, the rally gathers on Grand Parade Street from noon, marching at 12.20pm.

The Galway demonstration runs between 1pm and 4pm in Eyre Square.

In Limerick people will march from Arthur’s Quay Park at 1pm, finishing at City Hall.

In Kerry, a rally begins at County Buildings, Rathass, Tralee at 9am, while Kenmare will host a demonstration from 9am to 1pm outside the courthouse.

In Ennis, Co Clare, protesters will also gather at 9am at The Height, O’Connell Square.

In Drogheda, Co Louth, the protest starts at 1pm outside St Peter’s Church, West Street. Dundalk’s Market Square will host a demonstration between 12.30pm and 3pm.

In Navan, Co Meath, the protest will take place between 1pm and 3pm at Market Square.

More than 90 “local support actions” have been organised by adults in their communities and workplaces for people who cannot make the rallies, while many schools will mark the day with other events involving pupils and teachers on campus.

Among the community events being held is a vigil on the main street in Dundrum, Co Dublin, for an hour from 10 am with the support of a cross section of local politicians and religious groups.

In Co Waterford, there will be a gathering at the Tramore beach lifeguard hut at noon, where the risk of rising sea levels will be highlighted. Among the other locations for events are Sligo’s Peace Park, and the Knockanrawley organic garden in Tipperary.

Details of all the Irish rallies and support events can be found at: https://www.stopclimatechaos.ie/

Mira Hench, a student in Cork Educate Together Secondary School, said the climate crisis was an inter-generational issue. “We’re all in this together, young and old.”

Citing the rise in in the Green vote in the European elections, she said: “It has been proven that the strikes have made a ground-breaking difference, so we need everyone to come out and reclaim our futures.”

Molly Gordon Boles, a student from Temple Carrig School in Greystones, Co Wicklow, said: “We ask people of all ages to join our strike this time. If there is to be a solution to this climate crisis, we need every single individual to make a stand and work together.

“This is not just a responsibility for students, it is a global issue that needs to be tackled together.”

A number of third level institutions, notably UCC, UCD, Maynooth University and DCU, will have events to show solidarity with the young strikers with input by staff and student unions.

The global strike was instigated by Swedish teenager Greta Thunberg who has inspired a worldwide youth movement. The latest day of action is timed in advance of heads of government from around the world, including Taoiseach Leo Varadkar, attending a UN climate action summit in New York on Monday. A separate youth summit is being held in New York on Saturday.

Activist Lorna Gold, who was involved in setting up the FridaysForFuture, said the nature of the youth climate movement in Ireland was such that organisation of marches was very much “last minute and chaotic”. However, she predicted a record turnout on Friday.

The Irish branch of Parents for Future, Tuistí don Todhchaí, is calling upon everyone, “old, young and in-between, to come out in support of our young people”. The group was formed following a meeting of minds between Ellen Hegarty and Miriam Gormally, who had come out in support of their children at the Dáil school strikes last March.

Ellen Hegarty said Thunberg’s activism had struck a chord with young people. “But this problem should not sit on the shoulders of our youth. We all need to take a stand, show them we are listening and to impress upon our governments that they need to act.”

Other groups supporting the strikes are the Jesuit Centre for Faith and Justice and a new interfaith group “Faiths for Climate Action”.