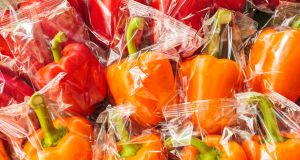 Applying a specific levy on single-use plastics is being considered. Photograph: iStock

Bringing an end to single-use plastics in Ireland and introducing environmental levies to prompt widespread change in human behaviour are among a series of measures to be announced by the Government on Monday.

The actions are part of an overhaul of the Irish waste sector announced by Minister for Climate Action and Environment Richard Bruton.

A ban on a wide variety of plastics, and moves to reduce food waste by 50 per cent and cut landfill disposal by 60 per cent are also included in the changes. They are being introduced to comply with the Government’s new climate action plan, notably its carbon emissions reduction targets, and to meet demanding EU directives coming into force in coming years.

The Minister is hosting a meeting on Monday with key players from industry – local authorities, waste collectors, household representative groups and NGOs – to discuss how the new policy can best be implemented.

It will have far-reaching implications for retailers (especially supermarkets); food outlets-restaurants, manufacturers, the packaging sector and consumers. A range of environmental levies is also being considered.

A separate review is evaluating how to deliver a 90 per cent collection target for single-use plastic bottles in Ireland, including the possibility of introducing a deposit and return scheme (DRS), and how this might operate in an Irish context.

More than 200kg of waste packaging, 59kg of which is plastic, is generated per person every year, which is above the EU average. Food waste alone costs homeowners €700 a year and accounts for a loss of €1 billion to enterprises.

The new waste strategy will also include a ban on single-use plastic plates, cutlery, straws, balloon sticks, cotton bud sticks, polystyrene cups and food containers as well as new fees on non-recyclable plastics, such as on food packaging in supermarkets.

The plan aims to end the use of non-recyclable plastic while doubling the rate of recycled material used with a view to increasing the recycling rate of plastic packaging by 60 per cent. Applying a specific levy on single-use plastics is also being considered.

“Managing our resources properly is crucial to securing a better, more sustainable Ireland for future generations,” Mr Bruton said. “It is central to the Climate Action Plan – 60 per cent of greenhouse gas emissions come from our use of materials.

“All along the supply chain we can do better – 70 per cent of food waste is avoidable, half of the material we use is not being segregated properly, two-thirds of plastic used is not on the recycling list and labels are confusing,” he added.

Those attending the meeting at the Irish Management Institute in Dublin will consider how to eliminate unnecessary packaging and put in place sustainable alternative options, while increasing the amount of recycled and recyclable material used. They will also examine what levies work best in changing behaviour.

Mr Bruton said they were now deciding how to chart the route ahead.

“I am determined to step up ambition and put in place strong policy tools to deliver on our new targets. Today is a chance to shape that roadmap. Leadership in this area is crucial if we are to secure a more sustainable, resilient Ireland for future generations.”