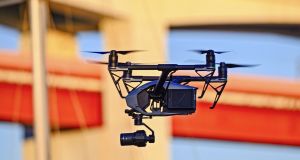 An average of 250 new drones were registered with the Irish Aviation Authority every month since June. Photograph: Horacio Villalobos/Corbis via Getty

The Garda, the Air Corps and the Irish Aviation Authority (IAA) are ill-equipped to deal with the mounting danger posed by drones, according to military pilots.

The threat from drones, or Remotely Piloted Aircraft Systems (RPAS), is “reaching a critical level” and only a minority (40 per cent) of Air Corps pilots feel well informed on Irish drone regulations, according to a Threat Analysis document which was presented to senior officers last week.

There are 14,330 large, privately-owned drones registered in Ireland, with an average of 250 new drones registered every month since June. There are also many more devices which do not require registration with the Irish Aviation Authority because they weigh less than 1kg.

With drones expected to be a popular Christmas gift, the overall number is expected to increase significantly this month.

“It is inevitable that there will be malicious or incompetent people who will misuse drones, which may ultimately threaten aviation safety,” says the paper, which was authored by three Air Corps officers and a Technological University Dublin lecturer.

“This potential is exacerbated greatly by the fact that the operators of drones are not exclusively aviation enthusiasts or hobbyists, and are far more likely to be casually uninformed or uninterested in flight safety.”

Researchers surveyed 86 Air Corps fixed-wing and helicopter pilots about the State response to drone safety. Less than a third said they believed the Air Corps was adequately prepared to deal with the drone industry.

Just under a quarter believed air traffic control is able to protect flights from the drone threat and 13 per cent of pilots felt they were receiving adequate education on the issue.

Less than a third of pilots considered themselves well-informed on the drone industry. The figure for helicopter pilots, who are far more likely to encounter drones, was just 36 per cent. A little over 40 per cent said they felt well-informed on drone regulations.

The Garda is the main agency responsible for enforcing drone laws in public areas. It also operates two helicopters, which are flown by Air Corps pilots. Only six per cent of pilots felt gardaí were adequately prepared to protect the airspace from drone operators.

There have been several recent incidents of drones disrupting civilian and military flight operations. In February, flights at Dublin Airport were briefly suspended following a drone sighting. This followed a series of similar incidents at London’s Gatwick Airport.

The study’s authors called for measures “to combat a quickly evolving and uncontrolled RPAS market” including coordinated training across the Air Corps, IAA and the Garda.

It is also imperative that every drone is registered with the IAA “in the interest of traceability”, they said.