Michael Viney: These hills are made for walking 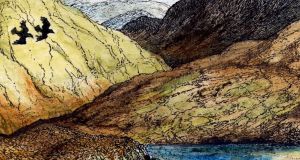 Most of Ireland’s uplands are farmlands and wetlands with “high natural value”.

The hills in winter, flattered by a low sun, offer a special invitation. Up there, the summits vigorously won, the air must be purer, the crystal views uplifting. A young body, or a wiry one, relishes the effort: stretched, elastic, all systems go.

Hillwalking celebrates being young and together, or older but not dead yet. As cities swell and priorities change, upland recreation of all kinds will be a lot of what the hills are for. It fits a new vision of their value.

Greater Dublin now supports some 50 hillwalking and climbing clubs, many with a special identity (ESB and bank staffs, American women, Christians, gay hikers and more). They take off in minibuses or even hire a coach for long weekend hikes and rock climbs. Good boots essential, and everyone with a head-torch, just in case.

There are 186 clubs nationally, with more than 13,000 members. They support the NGO, Mountaineering Ireland, in the slow crusade for freer access to the heights. But those urging a national uplands policy want much more than that.

Most of Ireland’s uplands are farmlands and wetlands with “high natural value” (HNV), their rushy fields, scrubby ditches, stone walls and heathery banks good for biodiversity, water quality and flood control. What they’re not much good for, in today’s world, is making a living from sheep.

Commissioned by the Irish Uplands Forum, Dr Brendan O’Keeffe and Dr Caroline Crowley have produced “a fine-grained and micro-level analysis of the human geography dynamics of the uplands”. Published by the Heritage Council, A Profile of Ireland’s Uplands identifies 57 separate ranges on the island and studies the lives of their local communities.

“The evidence is clear,” it concludes, “that, for now, hill farming is only sustainable through combining it with off-farm jobs.” This is already happening, but three-quarters of hill farms had a return of €20,000 or less in 2017, well below the average industrial wage, and jobs are especially scarce in the uplands of the west.

The Republic’s hill farmers are ageing and dwindling. Their exit from farming produces large sheep ranches of amalgamated land and a rising share of hillside houses for commuters, retirees and holiday homeowners. To these, as broadband spreads, will be added teleworkers and independent professionals, perhaps from the cities and seeking a healthier lifestyle.

Sheep, significantly, get a mention on only four of the study’s 140-odd pages. Connemara lamb does figure among “food” options for the future. But supplementary rewards from a range of government funds, say the authors, should come from looking after the landscape and its wildlife, tending walking paths and trails, and devising and managing different forms of recreation and rural interest.

At the moment, subsidies under the Common Agricultural Policy make up 90 per cent of the average family farm income on the hills. But a shrinking share of them are for the landscape, nature conservation and recreation that underpin the uplands’ future.

Basic access to the hills creeps on. In 2004, then minister Éamon Ó Cuív established the Countryside Council, Comhairle na Tuaithe, to devise solutions. Its first pilot project, in 2009, was based on voluntary agreement with landowners in a defined mountain range. It was introduced in two areas, Mount Gable near Clonbur, Co Galway and Carrauntoohil in the MacGillycuddy Reeks, Co Kerry. Vital to the scheme was an indemnity from the Department of Rural and Community Development, securing farmers against any claim for damages or injuries arising from recreational use of their land.

As Government delay drifts on, the project has stalled, although, as the new study promises, “key stakeholder groups remain committed to its vision”. For a decade, however, the Rural Development Programme has succeeded in recruiting farmers to maintain established trails that pass through their land.

Climate change, meanwhile, finds the hills both as “water towers” for the lowlands in times of drought and also as sources of damaging floods. Low-intensity HNV farms with good plant cover, walls and banks act valuably to filter the water and hold back the floods.

Intense rains and droughts of climate change impinge on the hills higher up, drying out bogs and peat-hag summits and hastening erosion by the wind, or generating landslides. Hillwalkers, too, can damage natural contours.

A new environmental policy for the An Oige Hillwalkers Club offers some helpful injunctions. Among them, “We will strive to walk on rock, stones or the most durable surface available, rather than on vegetation or soft ground . . . We will walk along the centre of mountain paths to avoid widening . . . We will avoid taking shortcuts on zigzag paths, as this creates new lines for run-off of water and increases erosion.”

Wearing away the hills used to take millions of years. . .