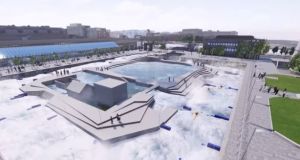 Plans for an almost €23 million international standard white-water rapids rafting circuit and polo pool at George’s Dock in Dublin will be presented to Dublin City councillors for approval next month.

The cost of the facility, originally estimated at €12 million, has almost doubled to €22.8 million. The council said the original cost had been preliminary and had not included design and demolition fees or VAT.

City councillors were shown plans last January to convert the early 19th-century dock into a mechanically-propelled rafting facility with a water polo pitch and an emergency service training centre. The 100m by 70m basin is located between the IFSC and the CHQ building next to the river Liffey.

A promotional video showing how the amenity would operate was released on Tuesday.

The council management had hoped to have final approval for the project by July but members of the council poured cold water on the scheme before May’s local elections.

The then lord mayor of Dublin Nial Ring branded the project a “white elephant” and questioned its value to the city.

“What’s the genesis of this? Whose baby is this? Who has decided the north inner city needs white-water rafting? . . . I can’t honestly support it at this stage, I think it could be a white elephant.”

However, following a change in the council’s composition since the local elections, council management has made a fresh attempt to develop the facility.

The council inherited George’s Dock from the Dublin Dockland Development Authority (DDDA) in 2016 following the quango’s abolition and has since tried to find a use for the facility. The dock is currently used for “ very occasional” public events the council said. A large rectangular temporary platform has been built at the centre of the dock, which is considered a “particularly insensitive intervention and in no way justified by the occasional events it accommodates”.

The council plans to demolish the former DDDA office building on Custom House Quay and replace it with two buildings to provide offices and support infrastructure for the white-water facility, including changing rooms and equipment storage as part of the project.

The council hopes the facility will be used for “elite kayak slalom squad training”; for national and international white-water kayaking events; by the fire brigade and other emergency services and local authority staff for rescue training to deal with fast moving waters, including floods; for canoe polo and water polo matches; as well as for tourist and recreational rafting.

The council said it intends to fund the majority of the costs through grants.