More than 1,600 people turn out in Dublin while an estimated 700 strikers march in Cork 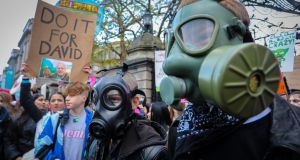 Irish schools climate strikers took to the streets again in their thousands on Friday to declare the Government’s response to a warming world is still not urgent enough, given what’s facing the planet – and flagged opposition to any move to import liquefied natural gas (LNG) into Ireland.

In Dublin more than 1,600 people, mostly secondary school students, turned out, while in Cork an estimated 700 strikers marched. Smaller protests were held at many other locations, while hundreds of rallies took place around the world – Friday protests outside Dáil Éireann, which have been taking place for months, usually attract up to 150 people

“We will soon be able to vote. In my case that will be in a year and three days,” declared Conor Slattery from Blackrock, Dublin, as an indication that any notion the strikers will quietly accept what has been announced by the Government in recent months and go back to school.

Speaking at a rally in Kildare Place, after they had been moved by gardaí from outside the Dáil on health and safety grounds because of the size of the crowd, he said national governments and global corporations – not individuals – were most responsible for climate change and needed to respond in a more meaningful way.

He then asked the crowd: “What should come first, profit or the planet?” Referring to politicians, he said, “they know what is right” but persisted with out of date economic thinking and not acting in response to the climate crisis because of fear, “as money continues to over dominate”.

He finished with a rallying call, “Power to the People. Power to the People.” A chanting session followed with protestors invited to stand on a plinth. “The oceans are rising and so are we” and “Whose future? Whose lives? Our lives!” followed. One of the organisers then announced to the crowd: “We are not affiliated to any political party” but united in cause to secure a safe planet.

The recent Youth Assembly on Climate staged in the Dáil chamber was dismissed by some speakers as a showcase for politicians. One assembly delegate, Brooke Dwyer from Dublin, said it was a source of regret it was being used by some in Government to suggest they were taking the right action.

Their 10 demands had been given to Minister for Climate Action Richard Bruton and even the UN but “there is little indication of action on these in a serious and strategic way”.

She read out their “proclamation”, highlighting proposed moves to import LNG when fracking in Ireland was banned, and asked fellow protestors to endorse it online as “they are from your youth assembly”.

“We see the lip service and the photo opps,” added Molly Redmond from Greystones, “We are here to call you [politicians] out on your actions.” Importing fracked gas from Pennsylvania was unacceptable when biodiversity loss and pollution of water and air would be left in its wake, she added.

Poet Lucy Holmes from Mullingar read her latest work Rage – which described a funeral procession for the Earth, a wish to “shout at the men in black suits” and a final declaration, “let history show the children were right”.