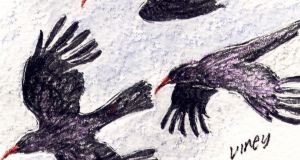 If an island is lucky there’s a flock of choughs, the red-billed crows of Ireland’s western seaboard. Illustration: Michael Viney

The last of the November sun found the islands floating in what looked a lot like silence. There are sea-sounds always, sighing away even in a flat autumn calm. But the cliffs have lost the summer’s nesting clamour of migrant seabirds and the air is left to the birds of winter: a few gulls and gliding fulmars, a pair of ravens, perhaps a watchful, hovering peregrine.

Above all, if an island is lucky there’s a flock of choughs, the red-billed crows of Ireland’s western seaboard. They bounce around the cliff-tops, their flock call a ringing, silver-edged “chee-ow!” It’s a joyous sound, full of energy and life.

Pyrrhocorax pyrrhocorax (so good they named it twice) is one of the rarer birds of western Europe and a prime and precious attraction of the Wild Atlantic Way. It is also its shyest, most vulnerable tourist product. On one Irish island, at least, choughs start calling to each other when people get within 50 metres, and fly off at an average “flushing distance” of 31.6 metres.

Such average exactitudes apply, it seems, to the choughs of Dursey Island in west Cork. Dursey is a refuge they share with the last six permanent inhabitants of its windswept land and some 20,000 visitors a year drawn to the venerable cable-car that links the island to the tip of the Beara Peninsula.

A €7 million tourist development by Cork County Council and Bord Fáilte now promises a new, two-way cable-car, a mainland visitor centre and cafe to bring the island some 80,000 tourists a year – a four-fold increase bulging in the summer. With objections from An Taisce, BirdWatch Ireland and Friends of the Irish Environment, the project is now up to An Bord Pleanála.

An Taisce’s big objection is to development that undermines “the quality and experience of the wild coastal landscape” by making Dursey a high-volume, car-based day trip instead of a destination for longer, local stays. But it shares in the wider concern for the future of the Dursey choughs.

Their numbers have fallen to about 10 breeding pairs, mostly at the western and wilder end of the island, aptly named Crow Head. Theirs is part of a 30 per cent decline in the whole Beara Peninsula, a special protection area for birds under the EU’s Natura conservation network.

As the project ecologist for the developers’ environmental impact statement, Dr Paul Murphy found the decline still unexplained, but acknowledged that “the potential impact of human disturbance as a result of increased visitor numbers cannot be ruled out as a contributing factor”. In pondering this, Murphy and his survey team could call on the experience of a popular tourist island off Brittany.

Ouessant Island (Ushant to the English) holds the last core population of choughs in northwestern France. Some 20km off the rocky western tip of Finistere, it is far enough out to need two lighthouses and attract more than 150,000 tourists a year – still rising annually – on bigger and better ferries. Many walk the dramatic cliff-tops that hold the island’s little flocks of choughs, repeatedly scaring them into flight, severely reducing their feeding, and increasing the mortality of the young.

This was reported in a paper in the Journal of Applied Ecology in 2009 as an alert to conservation scientists. For the Dursey Island impact survey team, it became a key source for comparison.

Ouessant is about 2.6 times as big as Dursey, but the short-leafed land that suits choughs, stabbing into turf for insect grubs, is less than 8 sq km, mostly around its windy, salt-sprayed coast where choughs and tourists converge. On Dursey, most of the island is good chough habitat, widely used by the birds.

This may explain why Dursey choughs let people get a bit closer before they “flush”, or fly away, than on Ouessant. The western end of the island is still the hotspot for their foraging, especially around the end of June. It’s here, too, that visitors, finding no defined pathways, tend to spill out across the open land where the birds are nesting and foraging.

Even so, Murphy proposes a 50m “buffer” along Dursey’s established paths would limit human disturbance at peak visitor times to a mere 1.33 sq km of foraging habitat, a fractional share compared with Ouessant. On that island, too, the choughs live in remote isolation, while Dursey’s can commute to forage on the heaths of the nearby mainland.

All this shaped his proposal that the maximum number of cable-car visitors should be 12,835 people at the August peak, controlled by ticketing and without any dogs. They will encounter an “education campaign” about the chough, its materials “aesthetically pleasing and emotionally engaging to encourage buy-in from visitors” and designed to stop them wandering off the well-marked paths.

Tourist “buy-in” is, of course, what matters to the whole of the Wild Atlantic Way. What 20,000 people a year have wanted from Dursey today, some 80,000 people tomorrow, it’s hoped, will never know the unmarked island they missed.