Michael Viney: The runaway seaweed that smothers our polluted bays

Sea lettuce is a serious problem for tourism, aquaculture and seaside communities 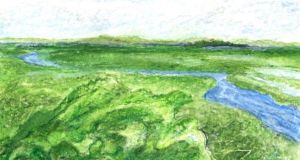 Sea lettuce is nourished from the estuaries by decades of run-off from intensive dairy farming and nutrients from human sewage. Illustratration: Michael Viney

The waking of spring in the ocean can only be guessed at from the pale, bare sweep of a surf-edged Mayo strand. But out around the islands and beyond, nutrients stirred up by winter storms, and the growing intensity of sunlight, conjure the rapid growth of microscopic plant plankton, basic food of the sea.

Spring blooms of phytoplankton, often visible from satellites, are fed upon by zooplankton, the miniature stages of fish and other marine life. Their grazing keeps a balance in the ocean’s ecosystems.

In some of our sheltered bays, however, notably at Courtmacsherry and Clonakilty on the west Cork coast, spring growth singles out one seaweed for rampant, uncontrolled profusion. Spreading in dense and ultimately rotting and reeking mats, it is nourished from the estuaries by decades of run-off from intensive dairy farming and nutrients from human sewage.

Running wild as shallow water warms up and then breaking loose, the rank growth of sea lettuce is a serious and intensifying problem for tourism, aquaculture and seaside communities. It smothers natural shore-life in bays of southern England and Brittany, and from Venice to China, where its blooms can weigh millions of tonnes.

A new study of Ireland’s “green tides”, testing for the absorption of toxic metals, found lettuce blooms weighing more than 2,000 tonnes and containing metals of wide variety: aluminium, copper, zinc and others far more harmful from pollution (pdf at journal.pone0169049).

Sea lettuce, a beautiful emerald green, translucent and only two cells thick, looks eminently good to eat. Indeed it is, gathered from clean and rocky, tide-washed shores and added to soups or salads. There are several species of the seaweed, and most of the samples gathered in eight estuaries and bays around Ireland, from Tolka to the Moy, were Ulva rigida, which can grow up to a metre long.

The species more often eaten around the temperate world is Ulva lactuca, a smaller and daintier plant. For profiles and pictures of both go to seaweed.ie, the encyclopedic site created and run by Galway’s Professor Mike Guiry.

NUI Galway’s Ryan Institute is also home to the six young and multidisciplinary researchers in the study. They were discovering if man-made metals, accumulating in massive sea lettuce mats, are threatening water quality.

They certainly found harmful metals – lead in the Tolka, cadmium in the Moy, and chromium in sea lettuce at Dungarvan, where effluent from an old tannery may have polluted the estuary sediment. The arsenic and cadmium in Clew Bay, on the other hand, are geogenic, traceable to quartzite in the mountains.

Levels of metal in the lettuce are generally modest by international comparisons. They match those of bays below the Moroccan rock phosphate mines, for example, but are nowhere near the levels of, say, vast lettuce mats in Venice’s lagoons, close to coastal petrochemical industry and weighing some 40,000 tonnes.

What can be done with it all? Quite often in west Cork, bulldozers have scooped it up and dumped it into an ebbing tide – which can just pass the problem on. In 2009, on the prompting of Cork County Council, an official Sea Lettuce Task Force was set up to consider control and disposal. A leading solution was to compost the lettuce for spreading on local land as fertiliser. However, as the Galway study points out, the toxic metals could accumulate year by year and eventually contaminate growing crops.

As the lettuce dies and decays on the strands it gives off hydrogen sulphide, the “rotten eggs” gas blamed for the death of a man jogging on the shore of a river estuary in Brittany. A research team at UCC is testing the yield of methane, from a mix of slurry and lettuce, as potential biofuel.

The Galway team find that the general metal levels in the lettuce comply with EU and Canadian standards for livestock feed, but, like the long-term effects of spreading on land, the use as animal feed needs more research.

Reducing pollution of the estuaries and bays is the obvious need and was a priority of the Cork task force. Sewage treatment plants needed improvement (though some nutrients in sewage survive even secondary treatment) and septic tanks warranted tighter control.

The restriction of farm nitrates in the EU’s Water Framework Directive is pushed to its limits in the dairy farming country of Munster. But a widely accepted view that rivers carry polluting phosphates to nourish the blooms of estuaries was challenged by earlier research, published in 2000, in which the Martin Ryan Institute took part (“The fate of nutrients in estuarine plumes” at marine.ie).

Phosphate actually floods in from the seawater end of the ecosystem, the study found, “and is therefore obviously unmanageable”. This makes control of river nitrates all the more essential.