Having survived in our seas for 420 million years, some species are now critically endangered 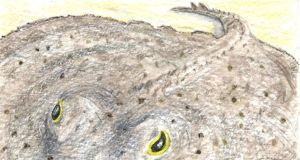 It’s the way they would look at me when I hauled them in to the sand: such reproach in their eyes, dark marbles hooded in twin nacelles above their noses.

They had their defences – vicious, rose-bush barbs on their backs and tail and a little pursed mouth on the pale underside that bites hard like a teething baby. But their spreading, generous, tremulous wings were what we wanted and carved out for the freezer.

So much for “self-sufficient” dawns on the strand, harvesting the catch from a line of baited hooks (the spillet). At least, I am reassured to read, our share of thornback ray in no way threatened the survival of the species. Of some 58 sorts of fish newly assessed for risk, Raja clavata is among those “of least concern”.

They are all cartilaginous species (sometimes elasmobranch, or even chondrichthyan, if you can say it), which is to say strictly boneless fish, shaped and braced by more pliable structures (to eat a delicious ray wing, you slide the flesh off a lattice of thin plastic). From sharks, skates and rays to dogfish and rabbitfish, they arose as a group at least 420 million years ago and share in Ireland’s ocean from the greatest depths to the very edge of the tide, their species accounting for more than half the European list.

These are described and assessed in a new Red List published online by the National Parks and Wildlife Service (npws.ie). They embrace the “chimaeras”, fish with big eyes for the dark and deep and tapered, rat-like, tails. The rabbitfish is Chimaera monstrosa, which certainly catches its strangeness, but its “near-threatened” status, like that of other deep species, stems not from targeted fishing but a mortal fate as by-catch, hauled up and discarded by deep-sea trawlers.

Some of the six “critically endangered” species have been directly overfished, not only for meat but to feed the bizarre Chinese appetite for glutinous and costly shark’s fin soup. A prime victim in Irish waters was the big porbeagle shark, slow-growing, late-maturing and one of the few sharks able to stay warmer than the water around them, all the faster to hunt.

In Irish waters they are more common north of Lough Swilly in Donegal (though the rod-caught record of 365 lb (166 kilos) from 1932 still has a trophy head on show in a bar of the Achill Head Hotel). A decline in European waters of some 90 per cent in half a century brought a fishing ban in 2010 that has begun to bring some glimpses of recovery.

A far smaller deep water shark, the Portuguese dogfish, about a metre long, has suffered almost as much. Once fished by long-line for its liver oil and flesh, it had an EU quota until recently and is now banned. It now dies as discarded bycatch by trawlers for mixed species. That makes the ban “ineffective”, says the Red List report, with special concern for a fish whose whole life cycle is held in deep Irish waters off the west and north.

Still critically endangered is the big common skate, its wings once a gourmet choice in fish and chips. It was common indeed until the early 20th century, but by 1970 was counted as lost from the Irish Sea. It is banned from commercial fishing, but last year was restored to the specimen records of catch-and-release angling.

In Northern Ireland you have to go out six nautical miles to fish for it on purpose. Clew Bay, Co Mayo, once the most famous skate fishery in these islands, at last has signs of recovery from total loss.

The catch-and-release regime of today’s sea angling can add to marine knowledge. The blue shark, another quarry of angling charter boats off the west, has been extensively tagged off Connemara, but questions on stock levels still keep its status as “near threatened”.

Perhaps the most precious bay for elasmobranch life in the west spreads out wide, warm and sandy from Tralee, Co Kerry. It serves as the main Irish refuge – one of the last in the north-east Atlantic – for the critically endangered, slow-growing white skate.

Here, too, are most of the last few angel sharks, flattened like a skate (Squatina squatina) and up to 2.5 metres long. Its numbers have fallen so drastically that research anglers have come across very few in 15 years, even in the bay’s core area. Like the skate, the angel is especially vulnerable to fixed ground nets set for crustaceans.

Tralee Bay is under all sorts of protection by EU nature directives. It is, indeed, one of many “marine protected areas” around our coasts. But the protection of Tralee Bay is for its rich seabed and intertidal habitats and the birds that depend on them – not the fish that swim, feed and breed in its waters. For that, as the Irish Wildlife Trust has urged, we need a marine reserve.