Michael Viney: Murderous mink, menacing muskrats and the marksmen who keep them in check

The problem of aquatic rodents, first brought to Europe for exploitation in the fur trade, has grown along with their numbers 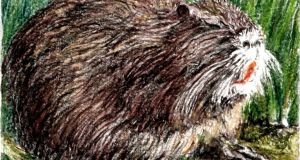 Coypum: introduced from South America, they are up to a metre long – including a rat-like tail – and weigh some 9kg. They are rather like small beavers with a flash of bright orange incisors. Illustration: Michael Viney

A minor trauma of my infancy was being swept into the embrace of an aunt who used to visit in her posh fur coat. Prickly, dark and smothering, it was like being hugged by a grizzly bear.

I doubt if the coat was mink – she wasn’t posh enough; perhaps it was “musquash” or “nutria”, as lesser breeds were called. My mother settled for a fox fur, wrapped around her throat and anchored by the animal’s head with staring glass eyes.

Murderous mink and vegetarian musquash and nutria, escaping from fur farms or other confinement, have all impinged on the Irish wetland countryside.

Musquash (otherwise the muskrat, Ondatra zibethica) was hunted to extinction in the 1930s. Nutria (otherwise the coypu, Myocaster coypus) may or may not have survived a hit squad of marksmen recently mobilised by the National Parks and Wildlife Service (NPWS).

They shot 10 coypu on the Curraheen river on the outskirts of Cork city in the autumn of 2016, and reports of further sightings, as far as Kerry and west Cork, are still being investigated.

Coypu and muskrat are vegetarian aquatic rodents, the first from wetlands in South America, the second from North America, brought to Europe as recruits to the fur trade. Both breed prolifically, with large litters, burrow deeply into river banks, and feed on their protective vegetation.

The first muskrats were imported from Britain in 1929 by a big-house couple in Co Tipperary, whose venture into fur farming was encouraged by the Free State’s Department of Agriculture as a welcome diversification.

After the first escapes, the nocturnal muskrats built up to thousands by 1933 in colonies along the Nenagh river and in Lough Derg, prompting fears they might even reach the flanks of the new hydroelectric dam at Ardnacrusha on the River Shannon.

A small army of local trappers killed all the animals along some 120km of waterways and drains by late 1934. This eradication campaign echoed one in Britain, which took far longer and cost a great deal more.

Coypu are much larger animals, up to a metre long including a rat-like tail, and weighing some 9kg. They are rather like small beavers with a flash of bright orange incisors, the front teeth. They were, reportedly, brought to Co Cork in 2014 as novelties for a pet farm but escaped to start a wild life in the rivers.

The current response to any fresh sighting (email danny.okeeffe@ahg.gov.ie) again takes lessons from the UK, where feral coypu invaded large areas of East Anglian fenland, from the North Sea coast to Cambridge and north around the Wash.

For fur farmers, one coypu could produce up to 60 descendants over a three-year lifetime. But at peak abundance in the 1950s in England the feral population was blamed for destroying reedbeds, burrowing through banks of flood defences and eating root crops such as sugar beet and carrots. They were severely depleted in several hard winters, but trapping was not declared a final success until 1990.

The amount of damage the animals did was sometimes disputed even at official level. But the charge-sheet insists that coypu can undermine river banks with tunnels 20cm wide and up to 10m long, with entrances beneath the water.

Destruction of waterside plants, (coypu like the roots and lower crunchy bits, and often leave the rest) can be locally severe, sometimes threatening rare plants and insects. Also, say researchers, they take rests in the riverside nests of waterbirds and may even eat the eggs.

A significant development in the East Anglia eradication campaign was the use of rafts bearing metal cages baited with carrots. An adaptation of these, now developed for the UK Game and Wildlife Conservation Trust, sets a soft pad in a tunnel on the raft to record footprints showing whether there’s a mink around, before trappers need to bait a cage.

A notable success has been the clearing of mink from an area of Scottish highlands twice the size of Co Mayo. Led by Aberdeen University scientists, teams from 186 local volunteers took three years to find, trap and shoot 376 mink along rivers flowing down from the Cairngorms National Park.

With designs and instructions freely available from the UK trust (gwct.org.uk), the raft has been widely adopted, not least in protection of important Irish sanctuaries by the NPWS.

In a 2009 review of mink predation and control, the NPWS put the mink population at up to 33,500 and the cost of effective removal from, for example, 800sq km of Connacht, at more than €1 million. But Ireland is bound by EU commitments to protect the diversity of ground-nesting and wetland birds, such as curlew and moorhens, the frequent prey of mink.

Key to the Scottish success was local and voluntary support. Is rural Ireland now, perhaps, ready to help rid the island of its most undesirable aliens?