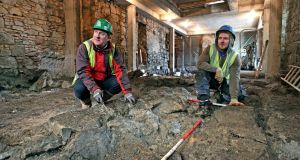 Sections of Galway’s earliest stone castle which shaped the development of the medieval port have been discovered during restoration of a 15th century manor house in the city.

Limestone walls forming the “missing” castle, built in 1232, were located by an archaeological team during preparatory work on the disused building on Quay Street, which has been acquired for a new Aran knitwear shop.

City heritage officer Jim Higgins described the find as “highly significant” in identifying the location of what may be Galway’s oldest building.

The first castle of “Bungalvy” was built by the Anglo-Norman de Burgh or de Burgo family on the eastern banks of the river Corrib in 1232, according to the Royal Irish Academy’s (RIA) Atlas for Galway by Jacinta Prunty and Paul Walsh.

The castle predated the later 13th century town walls, and the site is opposite the former Blake’s castle,which was built two centuries later.

At the time the river estuary was far wider, and the de Burgh castle overlooked a shingly shore bordering the Atlantic – evidence of which has also been located at the archaeological site in Quay Street.

Frank Coyne, director of Aegis Archaeology Ltd, said the de Burghs built on the original “dún” or wooden stronghold dating from 1124, held by the Gaelic O’Flaherty clan at the river mouth.

The castle was seriously damaged in 1233, just a year after its construction, the RIA atlas records, and it was burnt in 1247 during a fire in the town. It was also attacked a number of times.

Mr Coyne said the last record for the castle was in 1280, and it is believed stone from it was taken and used to build the Red Earl’s house, constructed later in the 13th century in what is now Druid Lane, just 30m away.

The archaeological director said there was a “gap” in knowledge about the castle site until a mansion was built there in the 15th century.

Charcoal deposits adjoining the two-metre wide western and southern walls of the castle may date back to the town fire, Mr Coyne says.

Animal material, such as pig and cattle bones, has been sent for radiocarbon dating, and Mr Higgins said that 13th century French pottery was found nearby.

The city council and National Monuments Service hope to work with the premise’s owners on displaying parts of the castle wall in glass panelling, similar to the project undertaken in the Red Earl’s hall.

Thousands of artefacts from clay pipes to cufflinks were unearthed during the Red Earl hall excavation and have been put on display.