Michael Viney: Wild Nephin won’t work if it is managed like any other park 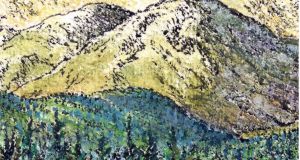 The Nephins – a glimpse of wilderness. Illustration: Michael Viney

Wilderness is where you can gaze to the far horizon without seeing a thing that man hath wrought, or hearing anything but the wind and the birds.

I was in such a place a couple of times, in the vast national park of northeast Greenland, a wilderness made a little spooky by the occasional imminence of bears.

In January, parts of northwest Mayo can also rouse the feel of wilderness: a stillness and tundra-like sense of space, a mystery of mountains, a pristine bowl of stars.

There, a “self-willed” future for nature has been promised in Ireland’s first experiment in “rewilding”. It has, however, met some doubts on how far the Wild Nephin zone will ever be left alone.

Bill Murphy, Coillte’s former head of recreation, environment and public goods, conceived Wild Nephin in 2012 as ultimately free of human intervention. It should nourish its own biodiversity and offer an experience of nature, “with beauty and hardships”, far from park roads and public loos.

His vision chimed with the “rewilding” movement so active in Europe and the UK, and the conservation of wilderness now urged by the EU. It also responds to the social need defined by America’s great conservationist, John Muir, over a century ago: “Thousands of tired, nerve-shaken, over-civilised people are beginning to find out that going to the mountains is going home, that wilderness is a necessity.”

Wild Nephin, launched in 2013, tempts the kind of tourist marketing that attends the Wild Atlantic Way, which happens to run directly past the western entrance to Ballycroy National Park. It also boosts the expectations of surrounding rural communities, already delighted by the park’s Dark Sky award. Wide support for the wilderness project can be sampled from a video on YouTube (“Rewilding the Nephin Beg Range”).

A 10- to 15-year conversion planned for Coillte’s forestry has been slow to get under way. Some forest roads have been narrowed into backpacker trails and bog drains have been blocked. But figures released to the online Green News show that Coillte had planted some 260,000 conifers in the Wild Nephin area since 2014 and harvested about the same amount.

Most were lodgepole pine, whose tangle of self-regenerating, uneconomic trees had sparked the first thought of Wild Nephin. Coillte also planted just 25,000 native seedlings, mostly birch, rowan and alder. In his own picture of Wild Nephin, Murphy sees the pine stands thinned and Sitka spruce replaced with native broadleaves, but fears tourist development that would tame an eventual wild landscape.

The change in control of the forestry zone may give the NPWS more freedom to clear, replant and rewild. But legal security for Wild Nephin – against, for example, wind turbines, phone masts or ESB wires – should be a priority. The new Minister for Culture, Heritage and the Gaeltacht, Josepha Madigan, should also weigh the many good reasons for moving the NPWS out of her department and into partnership with the Environment Protection Agency. The NPWS needs more autonomy and proper funding.

Where, in setting nature 'free', does park-keeping stop?

How Wild Nephin fits into the wider, and often controversial, debate on rewilding has been studied by Dr John O’Callaghan in his MA research at NUI Galway.

Comparing the Mayo project with wilderness projects in the UK, Spain and America, he urges more direct participation of local communities in Wild Nephin’s official planning team, quoting the success of BurrenBeo in conserving the wild landscape of Co Clare.

He also supports human attempts to control Wild Nephin’s invasive and alien rhododendron, a step demanded by biodiversity laws. But where, in setting nature “free”, does park-keeping stop?

Lodgepole pine is also an alien species, so its retention in “rewilding” can seem paradoxical. Wild Nephin could even be bracketed with Lough Boora Discovery Park, on Bord na Mona’s cutaway peatland in Co Offaly, as a “novel ecosystem” created from a degraded, man-made landscape. A 24-hour count of species in its different habitats, created by Bord na Mona ecologists but now left to themselves, has yielded an astonishing total of 946 – more than in either the Wicklow or Burren national parks.

Wild Nephin may attract golden eagles from Donegal, sea eagles from Kerry and even red kites and buzzards from the east. But restoration of “lost” predatory mammals such as wolves, lynxes and bears, already part of European rewilding and conjectured for the Scottish Highlands, is not contemplated for Mayo.

In his recent book Whittled Away, ecologist Padraic Fogarty, campaigner for the Irish Wildlife Trust, pondered on the potential of Ballycroy for reintroduction of wolves. O’Callaghan finds this most unlikely. For one thing, there are not enough roaming deer for them to kill.