Search the sky, comb the beaches: a nature challenge for 2018

Jump aboard: digital technology has given amateur science a whole new role 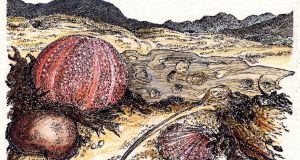 Tideline search: the Shark Trust has been leading a “great egg-case hunt” to locate the nursery grounds of shark, skate and ray species. Illustration: Michael Viney

The most exciting time for the amateur naturalist in Ireland, one might fancy, was when so much of the island’s natural world remained unexplored and unthreatened. A good brass microscope was the acme of equipment – that and some security and leisure.

Most enthusiasts in the 19th century belonged to the ascendancy: academics, big-house gentry, country rectors and other Protestant eccentrics.

In the countryside, the early lyricism of monastic nature poets had long withered in agrarian misery. The emergence of an independent Ireland then measured nature for essential priorities. Politicians and people shared in the sense of human domination enjoined in Genesis and lately rejected by Pope Francis.

All this caught a half-developed island quite unprepared for the engagement with the natural world that arrived in the later 20th century. The rush to conservation came with directives from Europe, and the valuing of biodiversity from global concern with the planet’s ecological crisis.

In the great blossoming of interest in the natural world that followed, the State was eventually persuaded to fund a National Heritage Council and a National Biodiversity Data Centre to record the sightings of wild species (another 17,000 records this year).

The awakening urged on by NGOs and schoolteachers was nurtured by natural-history television (the BBC’s the best in the world).

Now, digital technology has given amateur science a whole new role, revolutionary in the public communication of science. Professionals, so often cloistered in their specialisms, awoke to the value of “citizen scientists”. Armed with computers, smartphones with cameras, GPS and other sensors, nonscientists can hugely extend the reach of surveys, or take over the laborious sifting of great quantities of data. The research journal Nature agrees: “Technology can make scientists of us all.”

An early example was from astronomers engaged in Seti, the search for extraterrestrial intelligence. Scanning the skies for radio signals, they accumulated an overwhelming mass of celestial data. By sharing their scans with home computers across the world, they enlisted thousands of amateurs in a search for new planets.

A leading online hub now is Zooniverse, a “people-powered research platform” with more than 1.5 million registered volunteers and a research team drawn largely from the University of Oxford. Its projects have ranged from transcribing old ship logs and tracking solar flares to identifying penguins in Antarctica and mapping plankton in the ocean.

The Citizen Science Association, based in the United States, draws members from more than 80 countries. Dr Joseph Roche, an astrophysicist who teaches on the role of science in society, attended its conference in Minnesota last year. He was struck by its running theme of the value to science of “truth-seekers” – this at a time when research is assailed by delusional forces in Trump’s US.

Dr Roche teaches at Trinity College Dublin, which has led activities to promote public interest in science. Its programme of “citizen” projects in 2018 will have the active co-operation of The Irish Times.

Meanwhile, Eye on Nature on this page continues to draw emails from readers who have made the rest of nature a rewarding part of their lives. This year brought an example of citizen science that was telling for its simple satisfaction.

The Shark Trust, based in the UK, has been leading a “great egg-case hunt” on shores around these islands to locate the nursery grounds of shark, skate and ray species, some of them now becoming rare.

It has built up more than 100,000 individual records, to which Co Kerry’s Norah Blandin and her 11-year-old daughter, Ayisha, have added a varied half-dozen. Walking the strands of Tralee Bay, mostly at Fenit, and guided by the Shark Trust’s online gallery of different “mermaid’s purses”, they have found and photographed those of nursehound; small-spotted catshark; small-eyed, spotted, cuckoo and undulate rays; and white skate.

The last has one of the biggest horned egg cases, and as a slow-growing skate has been grossly overfished. Tralee Bay, much protected under EU directives, is one of its last refuges in the northeast Atlantic.

In the wake of Christmas, as rubbish bins and wastebaskets overflow with festive packaging and containers, it’s a good time to be reminded of the menace of plastic in the sea. Coastwatch Ireland, based at TCD, reported this month on its latest citizen survey. Plastic bottles and caps were concentrated on some beaches “as though a marine hoard had been emptied”.

Both are among the common residue of Christmas. So, too, are balloons. In David Attenborough’s salutary finale to his wondrous Blue Planet II, on the BBC, there were so many human threats to the ocean to get through that the plastic tide, I thought, received quite short shrift. “What about balloons choking turtles?” I cried. But it couldn’t do justice to everything. And if dear Sir David felt he had to sign off optimistically, that’s in his nature.

Also in this spirit, I shall wish you a happy New Year, and good beachcombing.

Michael Viney’s Reflections on Another Life, a selection of columns from the past four decades, is available from irishtimes.com/irishtimesbooks; ‘viney@anu.ie