Temperatures to hit minus 3, as cold snap also prompts warnings for Northern Ireland 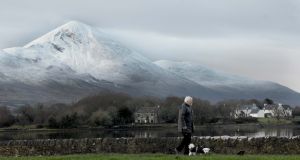 Met Éireann has warned parts of Ireland may be hit with snow. A snow-covered Croagh Patrick in Westport. File photograph: Paul Mealey

A snow and ice warning is in place in the north of the country on Wednesday.

The yellow warning is in place from 6am on Wednesday to 7am on Thursday morning in Donegal, Leitrim and Sligo.

Earlier, another yellow warning was in place for Cork, Tipperary and Waterford. This ended at midday.

A snow and ice warning issued by the UK Met office is also valid in Derry, Armagh, Antrim, Fermanagh, and Tyrone until midnight on Wednesday.

Wednesday will be very cold with frost and icy conditions gradually clearing throughout the day. Rain and sleet, mostly due in Munster, and snow clearing in late morning.

It will be brighter in other parts of the country with scattered wintry showers, especially in northern and western coastal counties.

Highest temperatures will be between just two and three degrees.

Showers, some wintry, will continue in northern and western coastal counties on Wednesday night, while the rest of the country will remain relatively clear.

Showers will become more frequent towards dawn on Thursday in the north and northwest with sleet or snowfalls.

Lowest temperatures will be between minus two and zero degrees with a moderate northwest breeze.

Thursday will be breezy with a mix of sunny spells and scattered showers, some turning wintry in places. There is a risk of hail and isolated thunderstorms.

Showers will become more frequent in the afternoon, especially along eastern coasts. Highest temperatures will be between three and six degrees but feeling colder with fresh and gusty northerly winds.