Another Life: None flies straighter or with more urgency than the wren 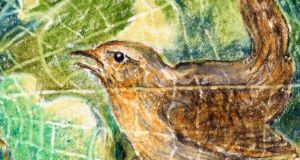 The mid-winter of a good breeding year may find up to 20 million wrens in these islands, some six million of them in Ireland. Drawing: Michael Viney

On my first Christmas in Ireland, in 1961, I lived in a chilly holiday cottage in Tully, on Connemara’s Renvyle Peninsula. Across the road, the village emporium had a slab of bacon on the counter, galvanised buckets hanging from the ceiling, and stamps on sale at the post office just beside the bar.

Here, on St Stephen’s Day, a pint in my hand, I faced four young entrants in cardboard masks, bearing a live wren on a holly twig in a 2lb jam jar. Their recitation of “the wran, the wran, the king of all birds” was stumbled through apologetically and secured the 50p I had left on the counter. It did not, I regret, secure the freedom of the wren.

Such local, small-scale customs have generally disappeared from Ireland, leaving YouTube videos to celebrate surviving, if wrenless, community festivals, notably in Dingle and Dublin’s Sandymount. As I write, their nature this Christmas seems uncertain.

Of all the myths, pagan or Christian, attaching to Troglodytes troglodytes (so named as the original “cave dweller” of Greek description), the one that appeals to me goes back to Aesop and explains the wren’s kingship as winning an avian competition in high flying. The wren hitched a lift under the wing of an eagle and took off even higher at the peak of the raptor’s flight, to win the contest. But there was punishment for such aeronautical mischief.

“When they were going down,” relates a tale recorded in Irish, “the eagle hit him on the back with his beak. He hurt him in the back and ever since he cannot fly but from hedge to hedge and from bush to bush.” Or, to quote a Ted Hughes poem: “The wren is a nervous wreck/ Since he saw the sun from the back of an eagle./ He prefers to creep . . .”

Stripped of such fancies, the wren attends our western winter in a loyal whirr of wings. In December dusks of dove-grey clouds adrift on flame, small birds dash about between the hedges and dry stone walls, as if remembering last-minute errands.

None flies straighter or with more urgency than the wren, which, as it sometimes seems to me, has the power of passing through the spokes of a bicycle wheel. Or, as Michael Longley sees it, “two wings criss-crossing/ through gaps and loop-holes,/ a mote melting towards/ the corner of the eye.”

In the wren boys’ refrain, “Although he is little, his family’s great” and that’s certainly true. Considered in sheer numbers alone, the mid-winter of a good breeding year may find up to 20 million wrens in these islands, some six million of them in Ireland.

I include all islands, large and small, for the wren hunts insects and spiders among the lichen-crusted rocks of even the most inhospitable terrain – the Skelligs, say, or remote St Kilda west of Scotland. On visits to north Mayo’s Inishkeas, wrens have flitted ahead of me along the tumbled walls.

With its tiny body and stubby, round wings, it is hard to think of the wren as much of a traveller. Indeed, the various races have arisen just because of their sedentary isolation. The wrens of St Kilda and Shetland and the Hebridean wrens are all distinct from each other and from our own wren. There is even a Fair Island wren: about 100 of them on their craggy little isle between Orkney and Shetland.

At no more than 12 grams, the wren is Ireland’s second-smallest bird, next to the goldcrest

The bird’s adaptability and pioneering spirit has created almost 50 distinct races in different habitats around the world. Some prefer marshes, some gardens, some cactus or canyons. The wren we know is of the same species as the rugged “winter wren” of North America. This reached the Old World by way of the Bering Straits, leaving a chain of different races across the Aleutian Islands.

Once it reached Siberia there was no holding it, since no other bird was around with quite its talent for creeping into confined spaces for food and for surviving beneath a blanket of snow. Guaranteed its niche, it spread west across Europe and even reached Iceland (where it is called the “mouse’s brother”).

At no more than 12 grams, the wren is Ireland’s second-smallest bird, next to the goldcrest. Although this doesn’t lessen the power of one of the most vigorous and piercing voices among our songbirds, its size does make it feel the cold. That can prompt it to remarkable togetherness at night, crowding into vacant nests, including its own, or piling into empty nest boxes, squeezing two or three at a time through the hole.

In 2010 the British Trust for Ornithology invited people to find out more, counting the entrants by eye at dusk or counting bird droppings in the box next day. Results suggested most “sleepovers” numbered half a dozen birds, but the record, from a snowy Norfolk in February 1969, was 63.