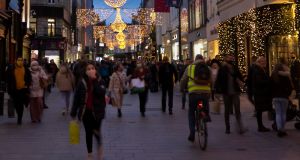 Traffic and footfall in Dublin city this month reached the highest levels since the coronavirus pandemic began, according to new figures from Dublin City Council.

Although people were still being encouraged to work from home, traffic volumes in the city centre had by the middle of December reached 86 per cent of pre-Covid levels, a higher figure than any time since restrictions were first introduced last March.

The number of vehicles travelling in and out of the city began to drop rapidly from the first week in March, hitting a low at the end of the month when strict Covid-19 restrictions on travel were introduced.

At that point, when travel was restricted to 2km except for essential reasons and most businesses were closed, traffic volumes fell to just over a third of their normal levels. Despite no change to the restrictions over the following month, traffic crept back to more than 40 per cent of normal levels at the start of May.

As travel and business restrictions eased in the summer, traffic increased. At the end of the first week in June, it was at about 60 per cent of its pre-pandemic volumes and by the end of the month it had hit 75 per cent and by July it reached 80 per cent.

There was a levelling off for the following months, until Level 5 restrictions were introduced at the end of October and traffic levels fell back to 60 per cent of normal levels. However, the move from Level 5 to Level 3 at the start of December saw an increase in city traffic of about 18 per cent, the council said.

The number of pedestrians in the city centre fell even more sharply last March, with automatic footfall counters, which operate on a 24-hour basis in the area between Stephen’s Green and Henry Street, showing an 80 per cent drop in people in the city.

However, by the middle of December this had reached a high of 60 per cent of pre-Covid levels. The effect of the lifting of restrictions was particularly striking on Henry Street where footfall since early December was higher than in previous Decembers, the council said. Footfall has also increased in Grafton Street, though not to the same extent, it said.

Cycling numbers, which are also continuously monitored by automatic counters, are at about 80 per cent of pre-Covid levels with this holding steady since the start of June, when the council’s measures to protect cycle lanes from encroachment by cars became prevalent across the city.