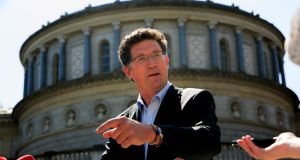 Green Party leader Eamon Ryan has said that from what he had read, the current Covid-19 pandemic was connected to the huge stress the natural world is under. File photograph: Gareth Chaney/Collins

The case for extending the Western Rail Corridor from Athenry to Claremorris is weak, Minister for Transport Eamon Ryan has said, but he wants a “wider review” to see if there is a case for the development of the Claremorris line in a larger context.

“I know everyone will say, ‘Jaysus, another bloody rail review’, but I think it’s [about] asking the right question, which is the wider question. And in the meantime, we’re not going to open the line immediately but we’re not going to rule it out in the future.”

Speaking to journalists, Mr Ryan also said that from what he had read, the current Covid-19 pandemic was connected to the huge stress the natural world is under.

The Green Party leader said that he planned to publish two reports into the potential of the Claremorris-Tuam-Athenry line shortly.

The reports, one by EY and another by Jaspers, do not come down in favour of developing the line, Mr Ryan said, but the main report, the EY report, considered “the slightly narrow question”, which was: would it be viable to deliver a commuter rail service from the likes of Tuam or Claremorris to Galway if you extended the Western Rail Corridor?

When railway services were originally extended from Limerick to Ennis, everyone said it wouldn’t work, that no one would ever use them, he said.

“And what happened? It was packed out, [has] been a huge success. Irish people love public transport; when we open it up, they tend to use it.”

Likewise, the service between Ennis and Galway had beaten expectations in terms of the number of users.

He said neither of the two reports decided that the Western Rail Corridor should be extended to Claremorris.

The EY report found that the numbers who would likely use the line from Claremorris and Tuam into Galway are relatively small , and that it would be better to make this journey by bus, rather than by train via Athenry. The Jaspers report also found there would be little commuter demand.

Mr Ryan said there was “significant potential” for a zinc deposit in the Limerick area that in turn would create a potential need for a rail freight service.

That would quite naturally lead to a railway freight capability into the port at Foynes in Co Limerick, with a rail line right down to the dock, he said.

For Foynes to get European status as a Tier 2 port, a top level port, it would need rail freight connectivity.

The Minister also said the development of the rail service in Limerick could lead to a modern metropolitan system that would in turn promote local development.

“I want to go to the European Union’s Recovery and Resilience fund and say: ‘Let’s invest in this.’”

Mr Ryan also said he has people coming to him saying the best region for offshore wind energy is the northwest.

He said that it was in the context of the region having a clean energy source, a reliable water source, a rail network, and connectivity to a port, that the viability of the line to Claremorris should be viewed.

“It’s not just serving Tuam or Claremorris. It’s about connecting up the rest of the northwestern rail system to that deep sea port.

“We want to do a wider rail review and look at the entire network to see, what is the potential development for freight, what is the use of underutilised rail lines, the likes of the Waterford to Limerick line, because if you are doing that [development] to Limerick, can you connect on to the Limerick to Waterford line to use it rather than close it? And that wider review we’re going to do next year.”

On the issue of climate change and the Covid-19 pandemic, Mr Ryan said that from what he had read, the pandemic was connected to the huge stress the natural world is under, both from the loss of biodiversity and climate change.